Our FrameWORK series on the Los Angeles General Plan Framework Element  is intended to introduce you to the citywide document that lays down the guiding principles for how Los Angeles will develop in the years ahead. For our Urban Form and Neighborhood Design Chapter (Chapter 5), we will be breaking it into two parts. The purpose of this chapter is to promote design excellence in the communities throughout the City, while maintaining neighborhood form and character. In Part 1 of this article, we will be familiarizing you with what the Framework establishes regarding urban design. Part 2 will describe several existing documents intended to implement the chapter.

In order to understand the physical nature of Los Angeles and its constituent parts, as well as discuss ways in which the City can influence improvements to the neighborhoods, the chapter is built around two concepts: Urban Form and Neighborhood Design. Urban form is defined as the patterns of building height and development intensity, and also the structural elements that define the City physically, such as natural features, transportation corridors, open space, public facilities, activity centers and other focal elements. Neighborhood design is defined as the physical character of neighborhoods and communities within the City. Physical character elements can include landscaping, architectural design, signs, or public art and vary widely from urban to rural neighborhoods.

The Framework’s Urban Form and Neighborhood Design Chapter begins with a summary of issues and opportunities identified in three sections of the document: Identity, Livability, and Accommodating Projected Growth.

Identity: A neighborhood’s history and culture also contribute to a community’s identity. Since residents spend a great deal of time in their individual neighborhoods and often identify more strongly with those areas than with the City as a whole, the physical design of these individual communities greatly determines residents’ quality of life. The Framework mentions the creation of an overarching citywide identity via mixed-use boulevards that would weave together the various districts and centers, while providing a structure for the City’s urban form.

Livability: Livability is the sum of factors that add up to a community’s quality of life. Housing, jobs, schools, and transportation are coordinated so that people have greater ease of movement and require minimal use of private automobiles. The pedestrian experience, for example, could be enhanced with widened sidewalks, street trees, lights and street furniture. Other factors in livable communities include good health and safety, opportunities for social interaction, linkage and access to open space, recreation, and entertainment. Neighborhoods could be linked to nearby parks and open space through the utilization of rights-of-way along transit routes, rail, and drainage corridors. New community facilities and open space could also be created by concentrating development around transit. The goals, objectives, and policies included in this chapter all contribute to expanding livability throughout the City.

Los Angeles is committed to being a livable city for existing and future residents by reinforcing the strengths of our communities. The strengths may be a combination of the factors that create a livable community including neighborhood design and form, street design, community facilities, and safety.

The Framework’s Urban Form and Neighborhood Design chapter addresses the topics below through a number goals, objectives, policies, and programs.

Citywide growth is encouraged along transit-served regional centers, community centers, neighborhood districts, and corridors. A neighborhood district is identified in the Framework as a type of traditional “Main Street” that serves surrounding single-family or other low density neighborhoods. All nodes of growth would provide a physical, commercial, and retail service focus for surrounding residents while connecting each other by mass transit. The Framework’s Land Use chapter describes regional centers, community centers, neighborhoods districts, and corridors in depth. For a quick overview, you can read our FrameWORK: Land Use article. 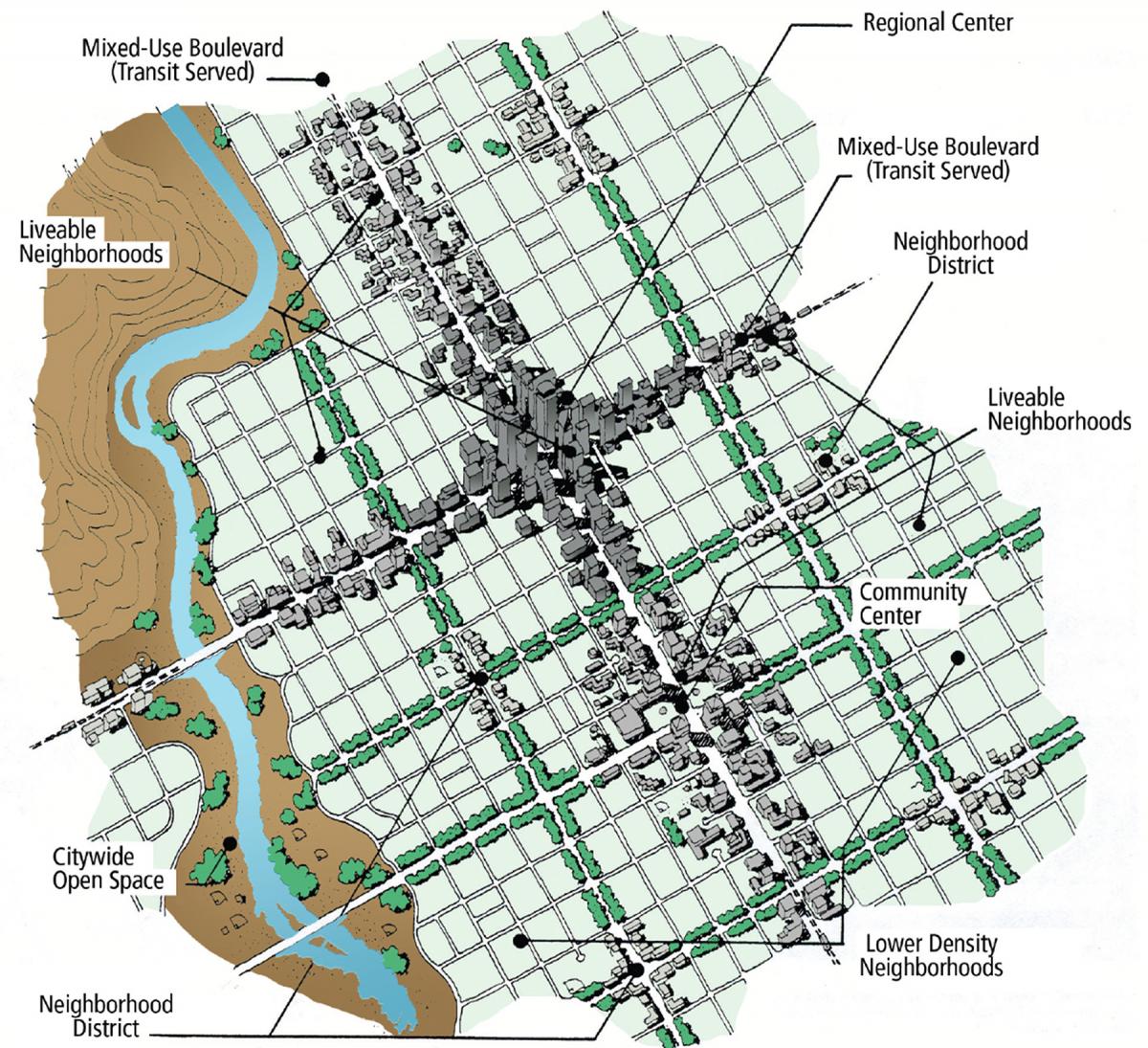 The Framework suggests that streets should accommodate all users based on a hierarchy of regional centers, community centers, neighborhood districts, and corridors that are oriented towards pedestrians. These pedestrian oriented districts should have characteristics such as ground floor retail and services and appropriate sidewalk and landscape design. The Framework also discusses zones of mass transit priority and zones of through traffic priority.

As mentioned previously, the City consists of a myriad of distinct neighborhoods and serves as the focus in city planning efforts. The Livable Neighborhoods section is further divided into three topics and describes several objectives and policies. Brief descriptions of each are provided below.

Conservation areas: Generally, areas outside designated districts, centers and corridors will not absorb a substantial amount of additional development. Rather, this is to be accomplished by concentrating growth along select areas of the city that will have little to no impact on residential neighborhoods. The Framework element also suggests transitions between the conservation neighborhoods and the higher density centers. The Land Use chapter discusses conservation neighborhoods and the transitions at a greater depth. For a quick overview, see our FrameWORK: Land Use article.

Neighborhood Districts and Community Centers: Neighborhood districts and community centers contain a concentration of mixed uses and become the focus of life for surrounding residential neighborhoods. The Framework intends Neighborhood Districts to contain smaller-scaled, single story or two-story developments consisting of businesses and entertainment while encouraging walking and biking from surrounding neighborhoods. Community Centers are intended to be medium-scale with higher intensity businesses, social activity, and dwellings. Pedestrian priority would be reinforced or established in Neighborhood Districts and Centers through several means such as: an appropriate mix of restaurants, cafes, shops, and other services, bike facilities, amenities for pedestrians, reduced parking requirements, and signs integrated into the architectural character of the buildings. For further overview, see our FrameWORK: Land Use article.

The Framework proposes good design as an approach to safer, more comfortable environments. Well-designed spaces lead to a sense of ownership and feature characteristics that allow for increased safety, such as close proximity of activities, accessibility, attractiveness, and mixed-use neighborhoods.

This is Where re:code LA Comes In

The Zoning Code Evaluation Report prepared as part of re:code LA identifies a number of recommendations related to Urban Form and Neighborhood Design. It is worth noting that not all the recommendations identified in the Report will be part of re:code LA, but will be incorporated as part of parallel efforts by the Department of City Planning and other City Agencies, or future planning projects.

re:code LA recognizes that the diversity of the 114 neighborhoods found in Los Angeles is a great asset. From urban neighborhoods like Westlake to semi-rural neighborhoods such as Tujunga, the City has made an effort to accommodate the wide variety in form and character. Today, there are 35 Community Plans, a multitude of specific plans, various overlay zones, and numerous interpretations by various City staff that address neighborhood issues. Unfortunately, this layering of tools, or regulations, over the years has created a complicated web of rules that requires professional assistance, even for routine development. re:code LA offers an opportunity to reduce the complexity of this system, while at the same time maintaining the diversity of neighborhood form and character.  Chapter 1: Distinct Neighborhoods of the Zoning Code Evaluation Report describes some of what to expect during re:code LA. Below is the summary of recommendations. 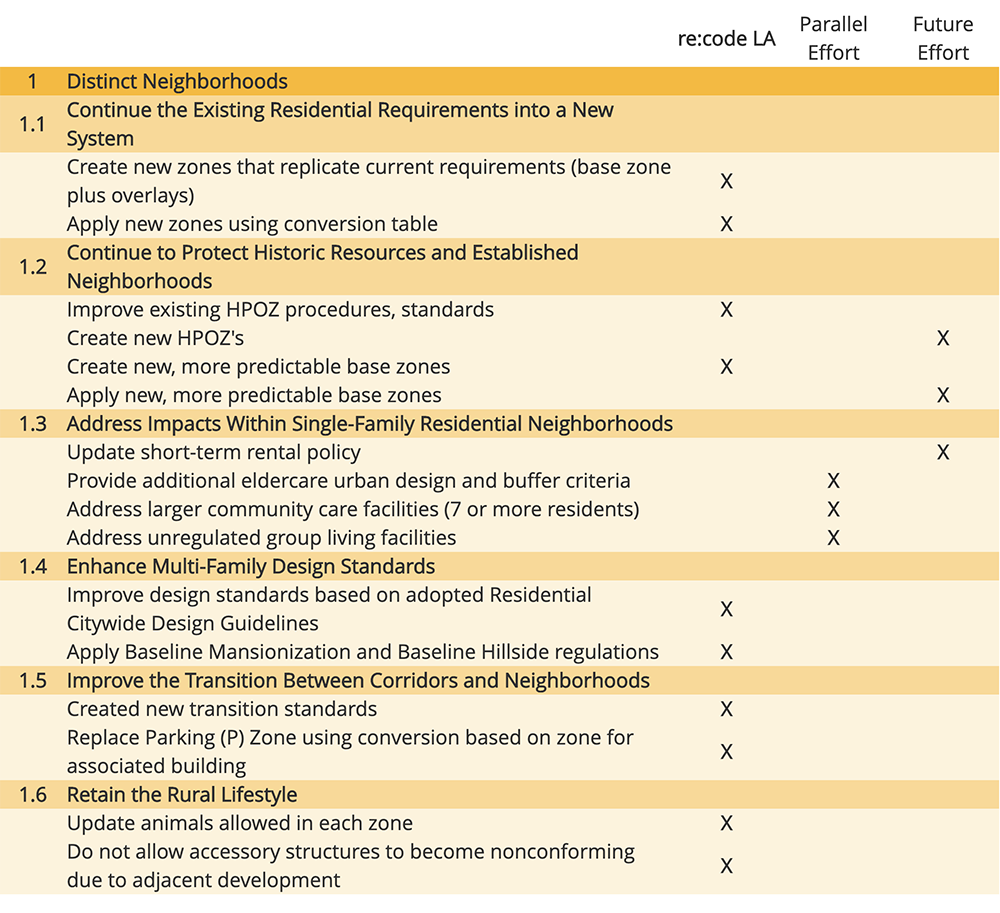 The creation of a vibrant and sustainable community requires a variety of uses, such as retail, office, civic/institutional, all within walkable proximity of a diverse array of residential unit types. From the most intense, mixed-use Development in Downtown, to mid-rise and low-rise development in outlying growth centers, re:code LA must acknowledge this and provide a set of rules for the wide variety of settings. re:code LA must also handle established auto-oriented commercial corridors, and provide clear development standards that enhance the overall quality of development in centers and corridors. The City will rethink its rules for commercial centers and corridors with a focus on providing accessible and healthy environments in which its citizens can live, work, play, learn and thrive. Chapter 3: Centers and Corridors of the Zoning Code Evaluation Report describes some of what will occur during re:code LA. The summary of recommendations below illustrates those that fall under the scope of the project. 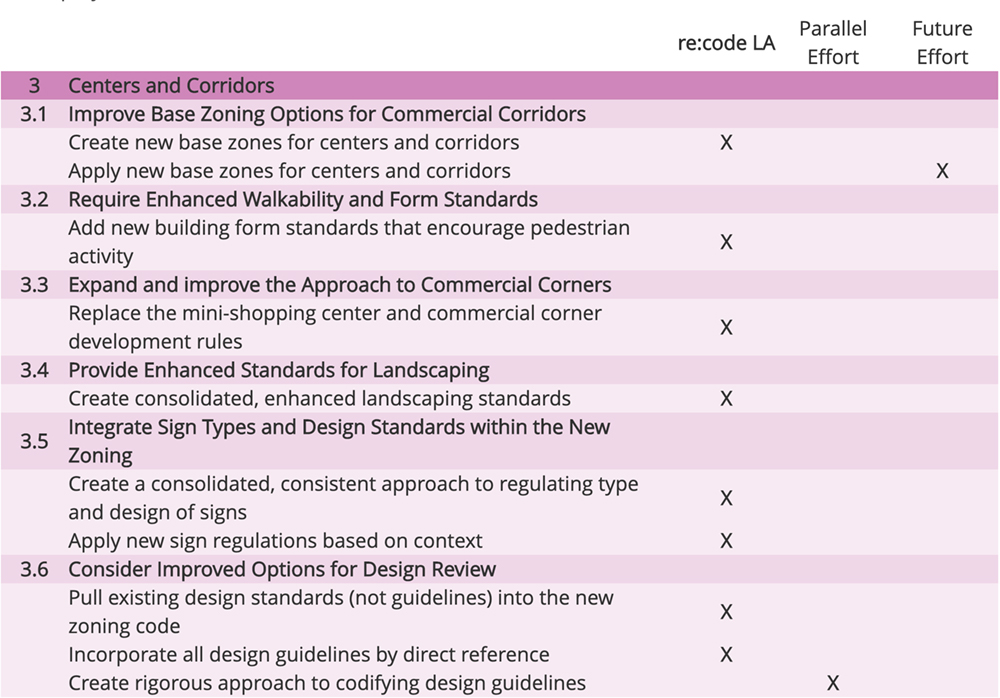 Stay tuned for Part 2 of this article!