What is Latino Urbanism? 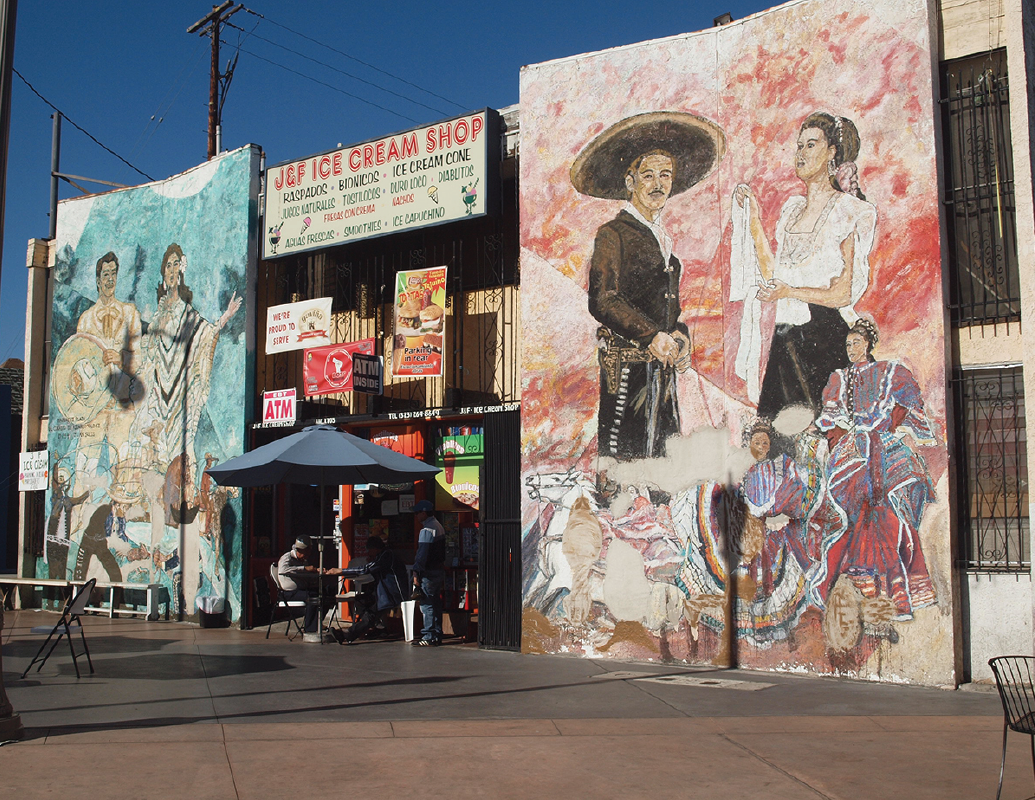 Latino Urbanism is a broad term used to categorize the multiple practices by which Latinos have created and contributed to the forms, functions, and cultural landscapes of American cities. While there is no one image or concept of Latino Urbanism that is all-encompassing of Latino identity, gender, culture, language, and spaces, we draw on the term in order to highlight urban spaces rooted in the Latino community’s rich and complex history, one that acknowledges cultural practices reflected in several urban spaces and places in the city.

Latino Urbanism reflects the history of Latinos in the U.S., which can be traced back to multiple periods of historical development, starting with recognition of multiple Native American tribal lands and pre-Spanish Mission Era. The recognition of this pre-colonial development period is key in understanding why there is no one image or concept of Latino Urbanism. Whether we inventory cultural roots by tracing a fourth- or fifth-generation Mexican-American back to Alta California, review the evolution of the physical landscape of pueblos transforming into cities, survey the cultural identity formation of Mexican-Americans, Chicanos, Latinos and Hispanics in the Southwest, or compare the settlement and immigration patterns in pueblos and cities across Latin America, the relationship between and overlap of Indigenous and European histories and culture is a common thread in many of the approaches to Latino Urbanism in American cities.

Considering the multiple cultural and physical forms that inform Latino Urbanism, highlighting the urban spaces that reflect combined roots from Latin America, Europe, and the U.S., becomes important in gaining further appreciation and understanding of this topic. The group or groups of people who identify as Latino draw from a mix of heritages and cultural traditions. Some of the cultural gathering spaces and urban elements of the built environment where we can draw connections to Latino Urbanism include plazas, mercados (like open-air markets or swap meets), and community murals and parks, all of which express the intersection of history, cultural identity, and place-making. 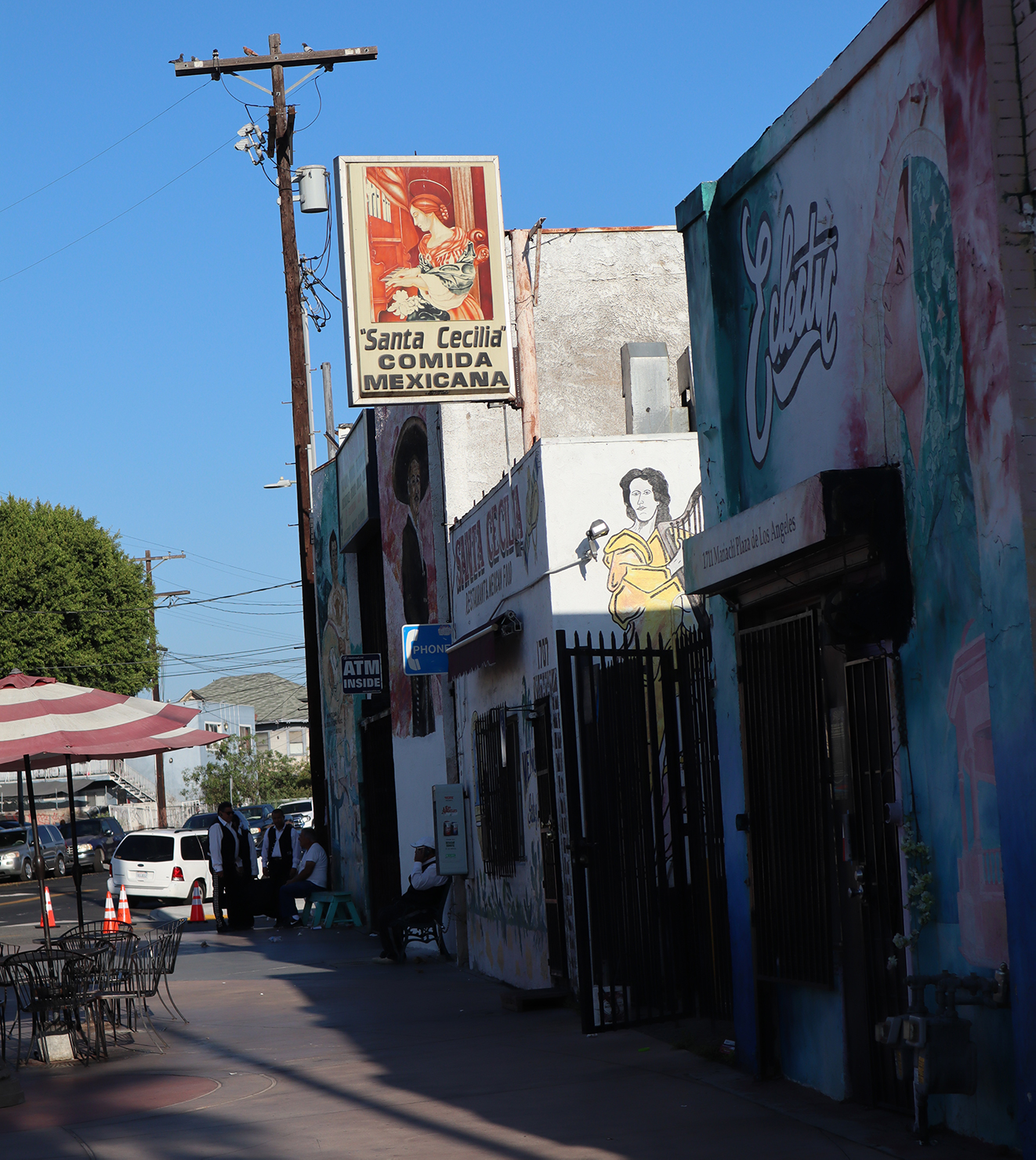 An example of this dynamic expression occurs at MacArthur Park, situated within one of the most popular areas of the city where Central American immigrant communities thrive. MacArthur Park has functioned as a park and a celebratory gathering place where diverse  immigrant communities, languages, and cultural cuisines come together. Designated as City of Los Angeles Historic Cultural Monument #100, this public open space has many resources close at hand, such as retail stores, residential areas, food vendors, social gatherings, public transportation, and recreation. Major memories like family birthday parties, weekend walks, and learning to ride a bike are formed in this community hub, an oasis in the bustling city. 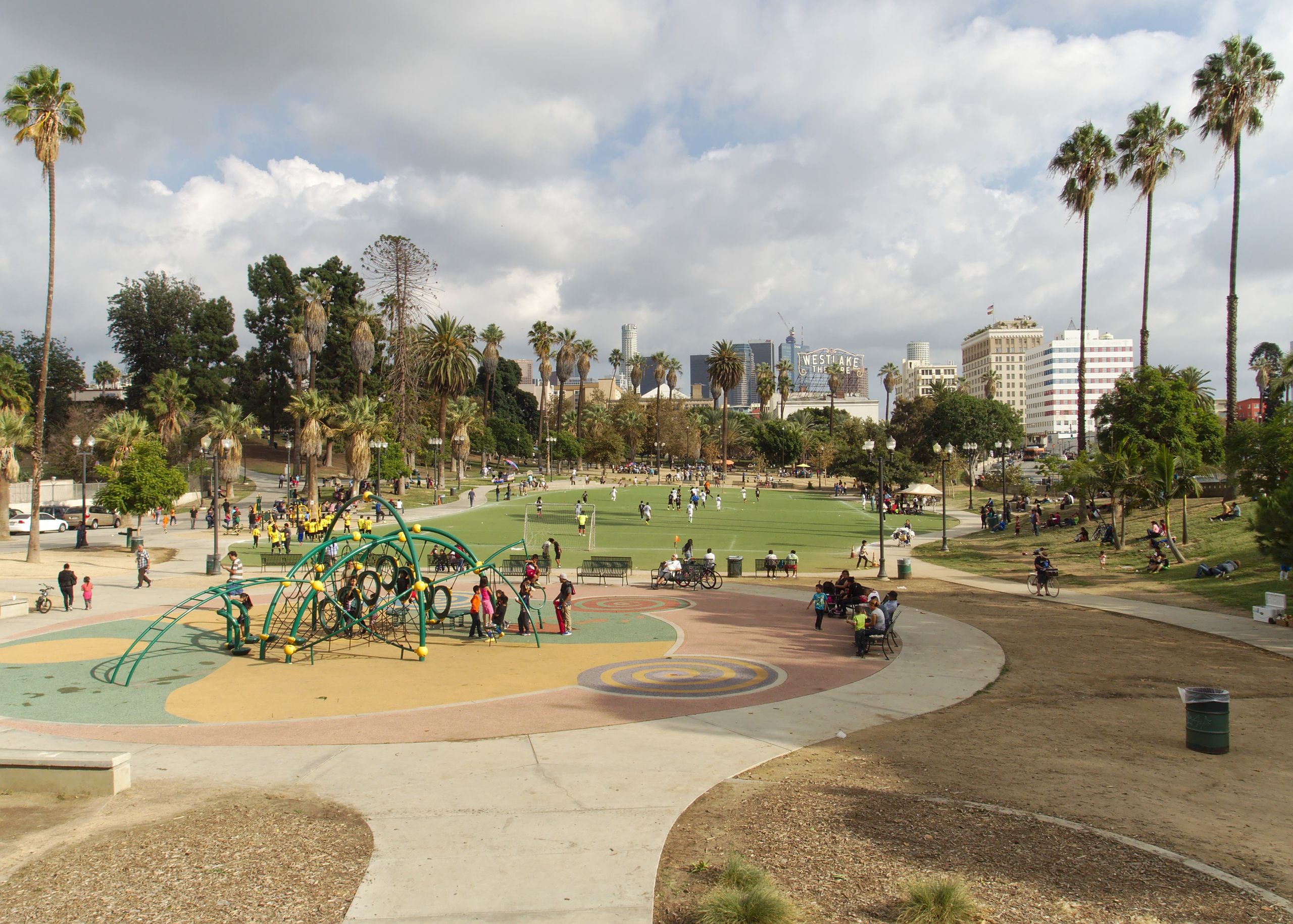 Levitt Pavilion in MacArthur Park showcases a summer concert series that connects people from all walks of life to celebrate music and the arts. Likewise, Latino Urbanism has influenced and supported healthy spaces that help communities gather and celebrate.

A big part of Latino Urbanism is culture created and experienced in a community with residential facilities that are a short, pedestrian-friendly trek from home. Latino Urbanism is the original 15-minute city concept: a way of designing neighborhoods so that all necessities, like employment, commerce, and relaxation, are within a 15-minute walk or bike ride.

Part of City Planning’s mission is to help maintain the character of neighborhoods. A particular characteristic of Latino Urbanism in Latino-dominant areas is the ubiquity of corner stores, or tienditas. City planners have helped champion these important small businesses in the neighborhood’s most recent Community Plan Update. Residents support local small businesses by picking up necessary items at tienditas, such as soap, paper towels, and fresh vegetables.

Another important form of Latino influence on the built environment is murals. Throughout Los Angeles, mural art is harmoniously infused into neighborhoods. Examples include the “Ramona Lisa” along the Mural Mile in Pacoima by Salvadoran-American artist Levy Ponce, the “Empowerment Mural” painting in Boyle Heights by Mexican-American artist Isabel Peinado, and “The Great Wall of Los Angeles” by Chicana artist, teacher, muralist, and Social and Public Art Resource Center (SPARC) founder, Judy Baca.

The City of Los Angeles continues to support Latino heritage people-first projects. Hospitable and social temporary events like CicLAvia’s open-streets festivities are patterned after a program in Bogotá, Colombia, to encourage a shift in urban design from a car-dominant vision to one that puts people first, highlighting pedestrians, cyclists, and small businesses. Such events are a living reminder that Latino Urbanism is dynamic and continues to influence Los Angeles every day.