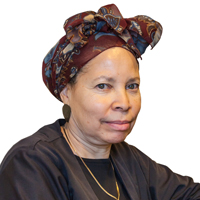 Commissioner Kennard is President of Kennard Design Group (KDG), the oldest African-American-owned architectural practice in the Western United States. Raised in Los Angeles, Ms. Kennard began her career as a journalist for United Press International and Time Magazine.She is a former public information officer for the San Diego Historical Society, and a former member of the Board of Advisors of the USC School of Architecture.