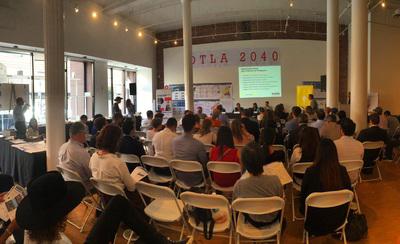 
The Department of City Planning hosted an “Open Studio and Design Charrette” as part of the outreach for DTLA2040 – the update to the City’s Central City & Central City North Community Plans. The event was held Monday October 3rd to Saturday October 8th, at the historic Bradbury building in Downtown Los Angeles. The space, which featured the draft plan, was open to the public from 9am to 9pm Monday through Friday, and 9am to 5pm on Saturday.

This was the first opportunity for members of the public to view and comment on the draft Community Plan policies for Downtown Los Angeles and the new zoning tools that will help implement them. Policies, strategies, and the new zoning code, developed as part of the re:Code LA project, were on display in a gallery-style format on the walls of the space. Participants engaged through one-on-one conversations, interactive and visual displays, and during scheduled events.

The agenda for the week included public drop-in hours around the clock, as well as facilitated panel discussions on Plan topics, including mobility and the public realm, housing and urban design, zoning, and economic development.

Speakers from various organizations including the Office of Mayor Eric Garcetti, the Office of Councilmember Jose Huizar, the Department of City Planning, the Department of Transportation (LADOT), Metro, Industrial District Green, the Los Angeles Center Business Improvement District, Pershing Square Renew, the Los Angeles Conservancy, Coro Fellowship, the American Institute of Architects, and many others participated in scheduled events

In addition to a steady stream of visitors throughout the day, the attendance for each panel session ranged between 60 to 100 attendees, amounting to approximately 800+ visitors over the course of the week.

Planning staff are now reviewing the feedback from the week and will release an update to the draft Downtown Community Plans later this year.