Directs growth around transit, away from hillsides and low-density neighborhoods

Supports the Hollywood Central Park over the 101 Freeway, and expands park acreage

Promotes the regulation of scale and design

The Hollywood Community Plan Update takes cues from the City's General Plan, particularly the General Plan’s Framework Element, which outlines a long-term strategy for Los Angeles. It lays out goals, objectives, and policies for the range of land uses throughout the City, including Hollywood, and it guides the development of the City’s Community Plans.

The proposed HCPU2 embodies these General Plan Framework principles and largely follows the current pattern of land use development, reflecting the City’s policies of directing development where it can be supported by existing transportation infrastructure. The proposed HCPU2 promotes a balance of housing and jobs near transit where providing different types of land uses (such as commercial and residential) can reduce the length and number of vehicle trips.

In 1988, the year the Hollywood Community Plan in effect today was adopted, subway stations had been proposed but not yet built. Since then, five Metro Red Line stations have become operational in Hollywood, and a transit-oriented specific plan was adopted in 2001. The HCPU2 will accommodate increased affordable housing demand and development near the Metro stations and selected commercial corridors with existing transit (bus and train). Directing the development to targeted areas will preserve the character of single-family and low-density neighborhoods.

A wide range of planning topics — including land use and housing, parks and open space, urban design, mobility, and historic preservation — are addressed in the proposed HCPU2, encompassing the full spectrum of issues related to the physical development of the community. Some of the new regulations and issues that have emerged since 1988 include increasing sustainability, improving mobility (Complete Streets Act), and reducing greenhouse gas emissions. The Plan’s importance lies in its ability to shape positive community change, fostering sustainable land use patterns while balancing the unique character of the community with citywide policies and regional initiatives.

From 2005 to 2012, the Hollywood Community Plan Update underwent a comprehensive planning process with extensive community outreach. Both the Draft and Final Environmental Impact Report were published in 2011, before adoption of the plan in 2012.

A legal challenge to the 2012 Plan’s Environmental Impact Report (EIR) followed the adoption of the plan. As a result of a Los Angeles Superior Court decision on the 2012 Plan’s EIR in 2014, the City Council rescinded the 2012 Hollywood Community Plan Update. The City has reverted, by operation of law, to the 1988 Hollywood Community Plan and the zoning regulations that existed immediately prior to June 19, 2012 (the date of the adoption of the HCPU and ordinance).

The 1988 Hollywood Community Plan currently in effect is available here. The 2012 Plan is no longer in effect. More background, along with information on entitlement procedures under the 1988 Plan and zoning, appears in the Zoning Information (ZI) file. 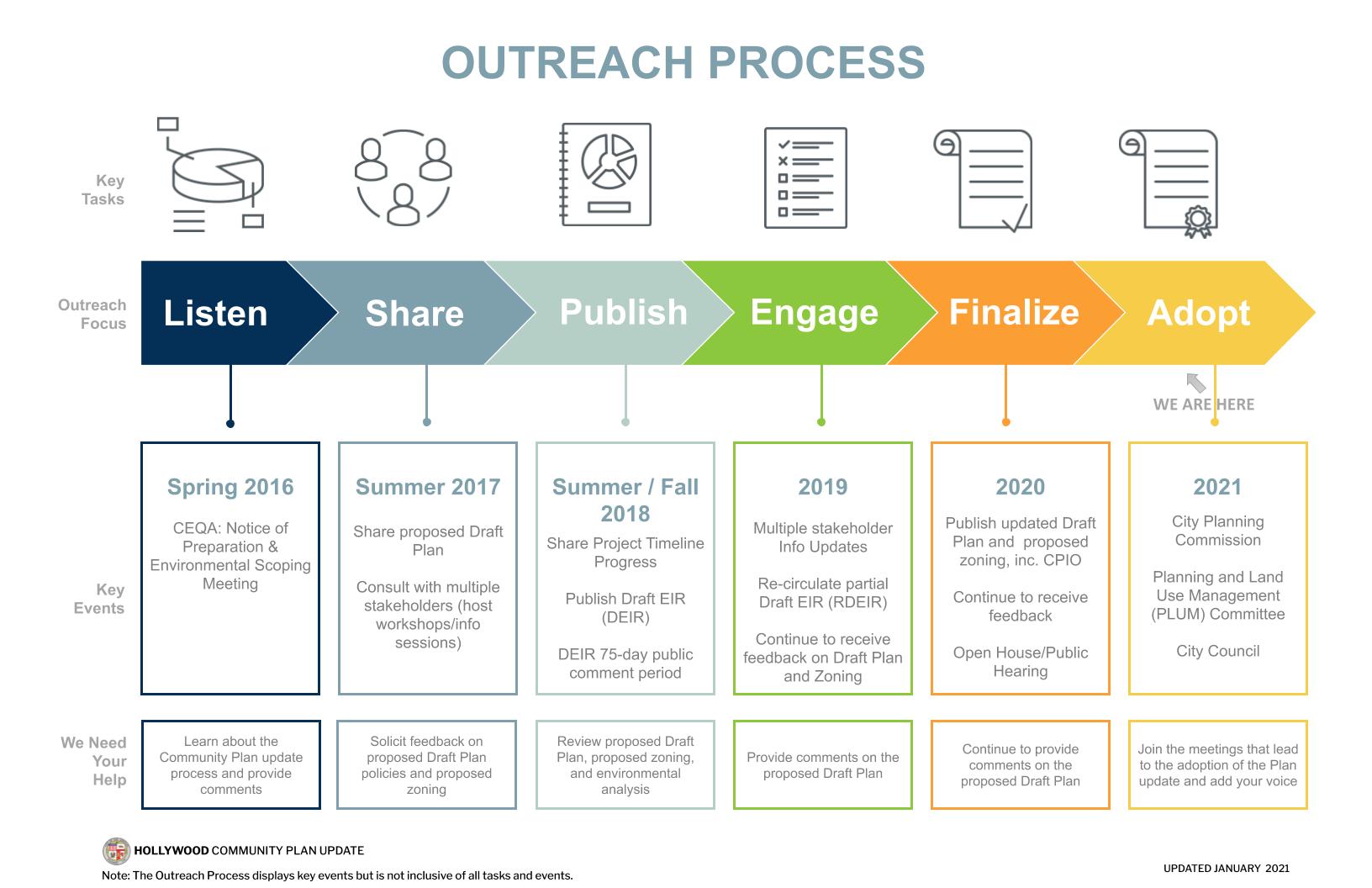 What is a Community Plan?

The City Planning Commission (CPC) heard the Hollywood Community Plan Update on February 18, 2021 and continued the item to March 18, 2021. On March 18, the CPC recommended approval of the Hollywood Community Plan with a few recommended changes, including more robust incentives for affordable housing within the central Hollywood area (the Regional Center), and the allowance of a two-story incentive for additional height along height-restricted commercial corridors, for projects that provide affordable housing units.

Click here to listen to the March CPC audio recording. Supplemental documents are available; other items including the staff presentation and Day of Submissions comments are here.

A public hearing was held at the February CPC meeting; the audio is available. Supplemental documents are also posted; other items including the staff presentation are available.

The project website, including the draft planning documents and interactive maps, will be updated soon in accordance with the CPC motion.

The CPC Staff Recommendation Reports and Exhibits are below:

An updated Draft Community Plan and a new Draft EIR have been released. Changes and clarifications include reorganized goals and policies, updated formatting of the Plan and maps, technical corrections and zoning revisions, and mobility and street changes reflecting the new Mobility Element. The update also adds neighborhood protections, a new chapter on preservation, and a new chapter on the public realm and open space.

What does the Plan do?

The interactive maps below represent proposed land use and zoning changes. Select the tabs for information about proposed changes.

Click the button below for a video tutorial on the interactive map. 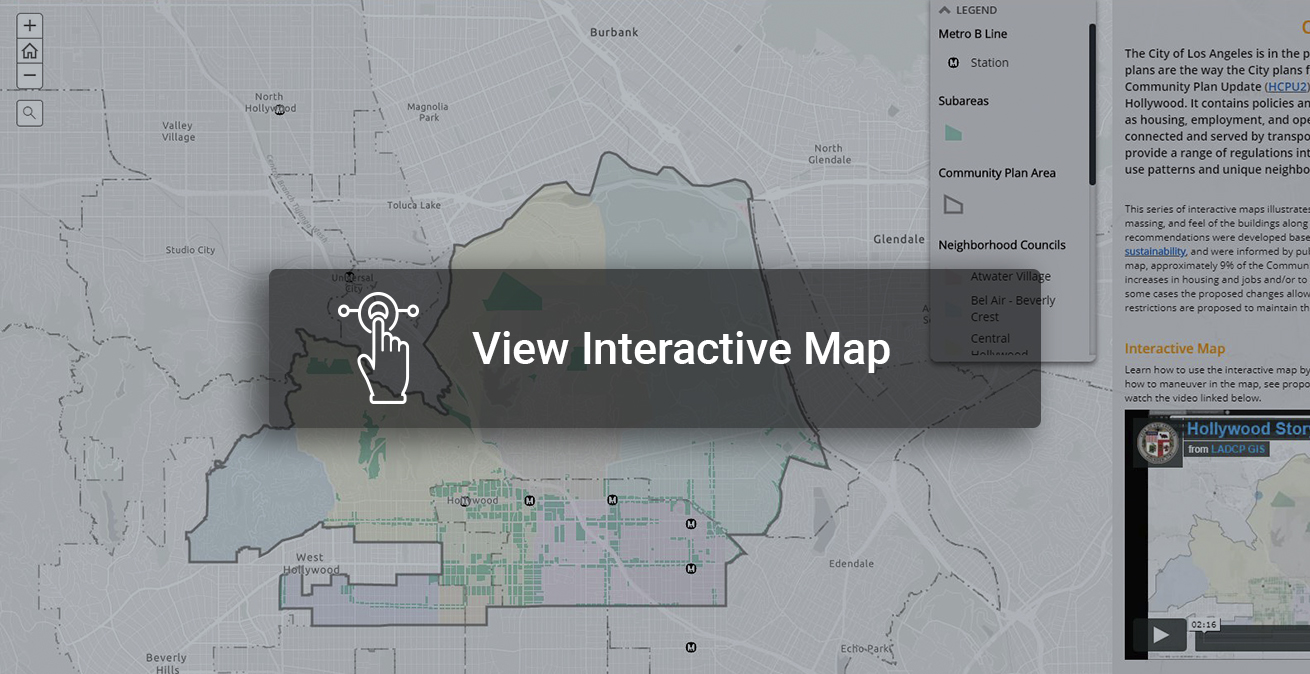 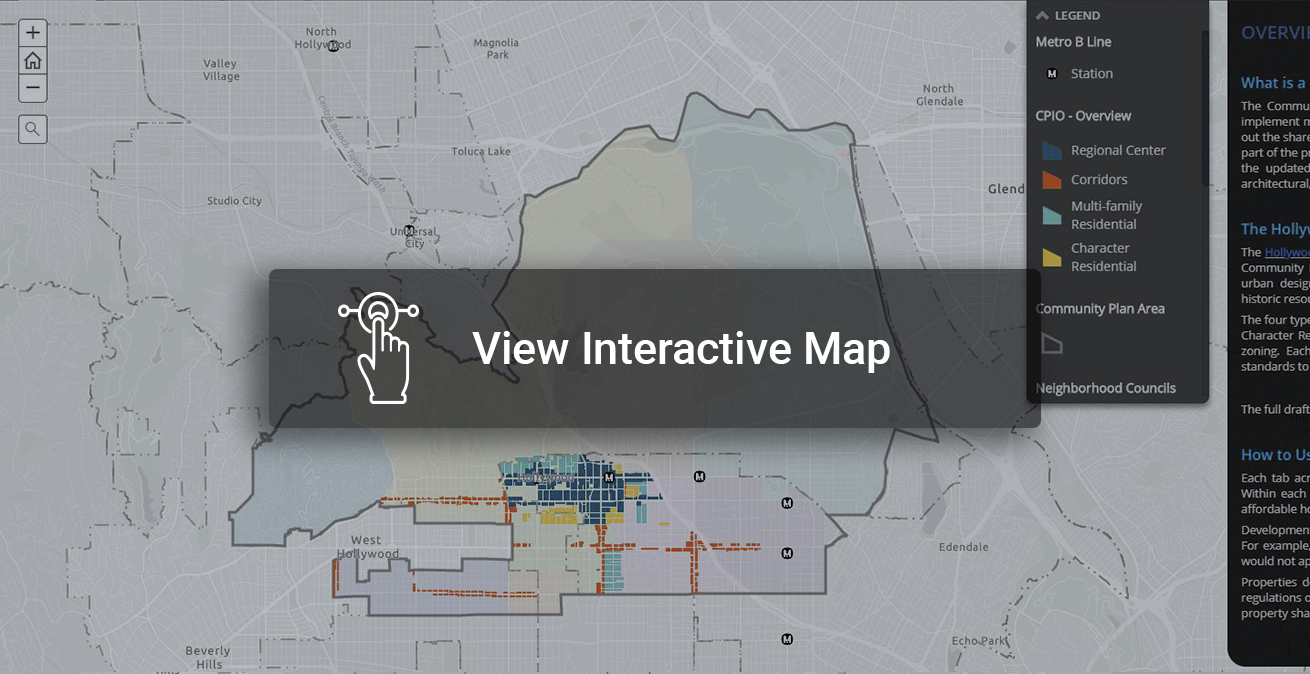 The Land Use Element of the General Plan consists of 35 Community Plans. Each focuses on a particular area or community in the City (e.g., Hollywood Community Plan).

The ratio of the gross floor area of a building to the area of the lot where it is located. (This video explains FAR.)

The General Plan is the City's guide for its future growth and development. The State of California requires every city to adopt a General Plan. General Plans have a typical lifespan of 20 to 30 years and must be updated periodically.

Each General Plan must cover certain topics in sections called Elements (such as the Land Use Element, the Housing Element, and the Safety Element).

The Framework Element of the General Plan lays out goals and policies for topics related to growth and services. All General Plan Elements adopted by the City need to be consistent with the Framework.

Zones or regulations included in the Community Plan that supplement basic zoning regulations and help realize the Plan’s goals for new development.

The public and quasi-public facilities required in order to serve the development and operational needs of a community, such as roads, public transportation, water, and sewer systems.

A project that combines compatible uses within the same structure, such as a building with residential uses above ground-floor commercial space.

Zoning determines the uses permitted on a parcel and provides regulations for development, including height, bulk, and setbacks.

On March 18, the City Planning Commission (CPC) recommended approval of the Hollywood Community Plan Update with a few recommended changes, including more robust incentives for affordable housing within the central Hollywood area (the Regional Center), and the allowance of a two-story incentive for additional height along height-restricted commercial corridors, for projects that provide affordable housing units.

Click here to listen to the March CPC audio recording. Supplemental documents are available; other items including the staff presentation and Day of Submissions comments are here.

A public hearing was held at the February CPC meeting; the audio is available. Supplemental documents are also posted; other items including the staff presentation are available.

Next, the Plan Update will advance to the Planning and Land Use Management Committee (PLUM), and then to the full City Council for adoption. Dates for these future meetings have not been established. Sign up online to receive future email updates about the Hollywood Community Plan Update.

The City Planning Commission (CPC) heard the Hollywood Community Plan Update on February 18, 2021 and continued the item to its March 18, 2021 meeting. The March 18, 2021 CPC meeting will begin at 8:30 a.m. Anyone wishing to participate may provide oral comments during the meeting, or send written comments to the Planning Commission ahead of time. For detailed instructions on submissions to CPC, please visit: https://planning.lacity.org/about/virtual-commission-instructions.

A public hearing was held on February 18. The staff presentation to the Commission included recommendations to update a few additional proposed zone changes and open space designations, and to clarify the land use regulation relationship between the Hollywood Redevelopment Plan and the Hollywood Community Plan Update.

On December 9, 2020, the Hollywood Community Plan Update held a virtual Open House and Public Hearing. The public hearing served as a means to collect comments from stakeholders; comments will be incorporated into the staff report before the Plan is brought to the City Planning Commission (CPC). No decisions were made during the public hearing. To listen to the audio recording of the Public Hearing, click here. The comments submitted during the Public Hearing comment period, which ended on December 16, 2020, are also available. 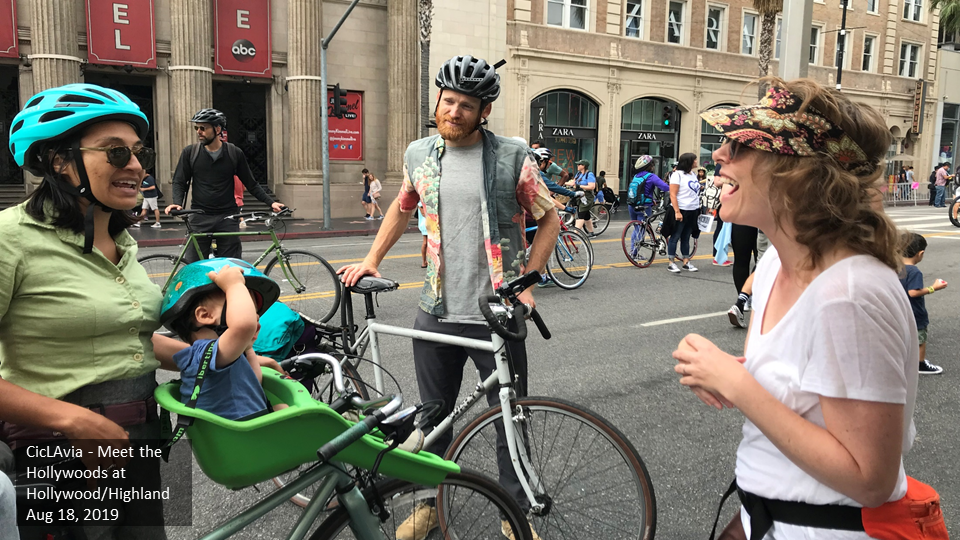 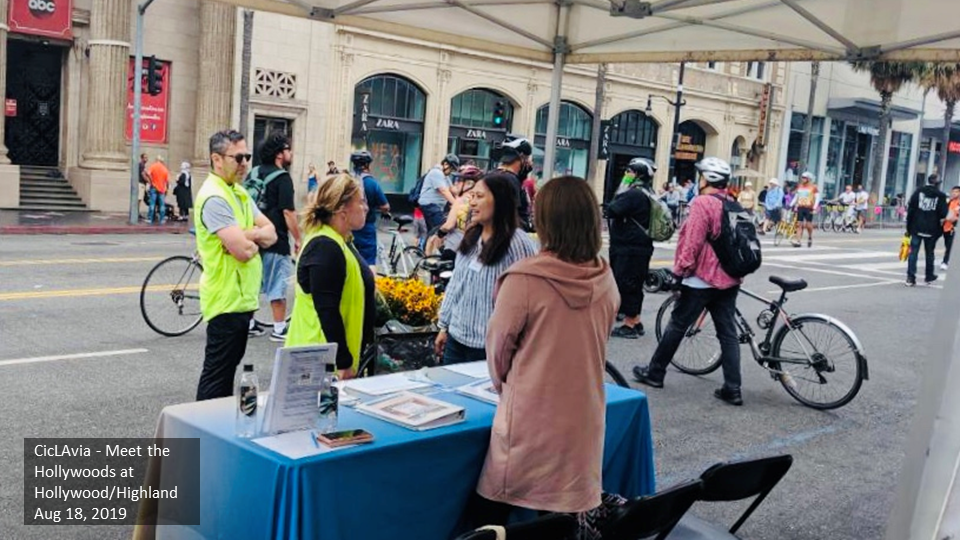 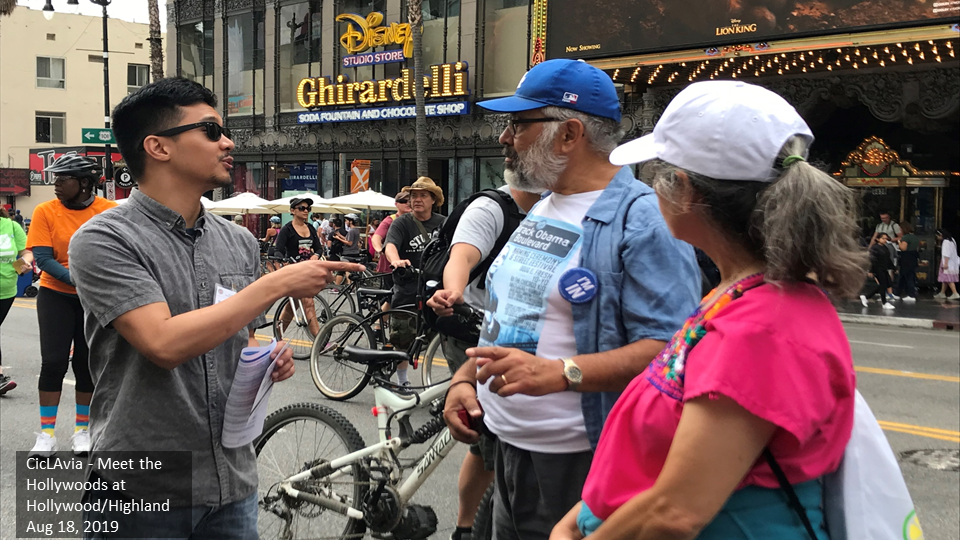 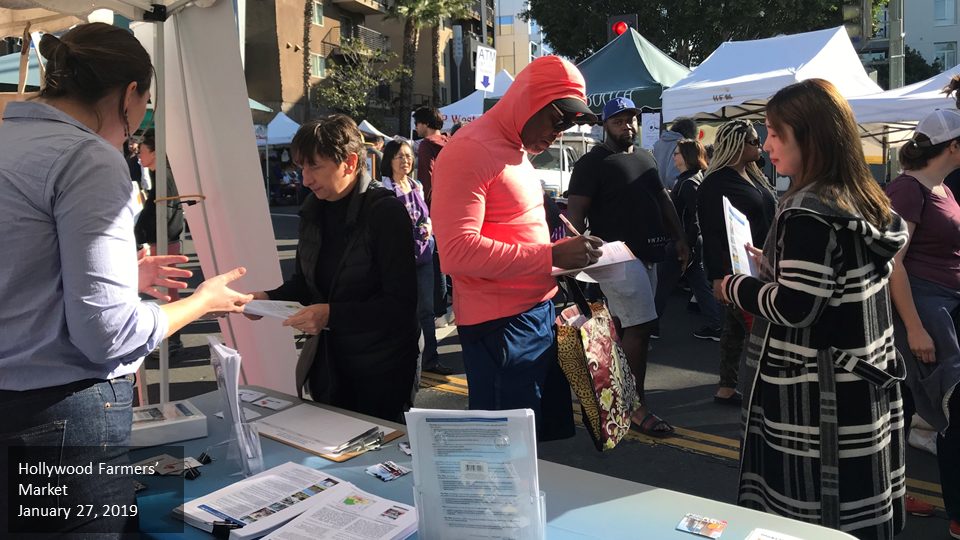 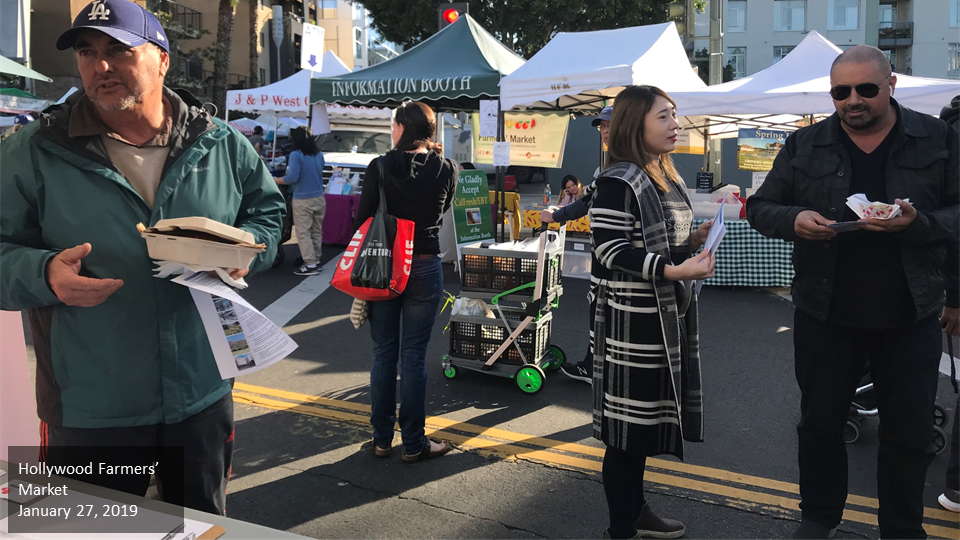 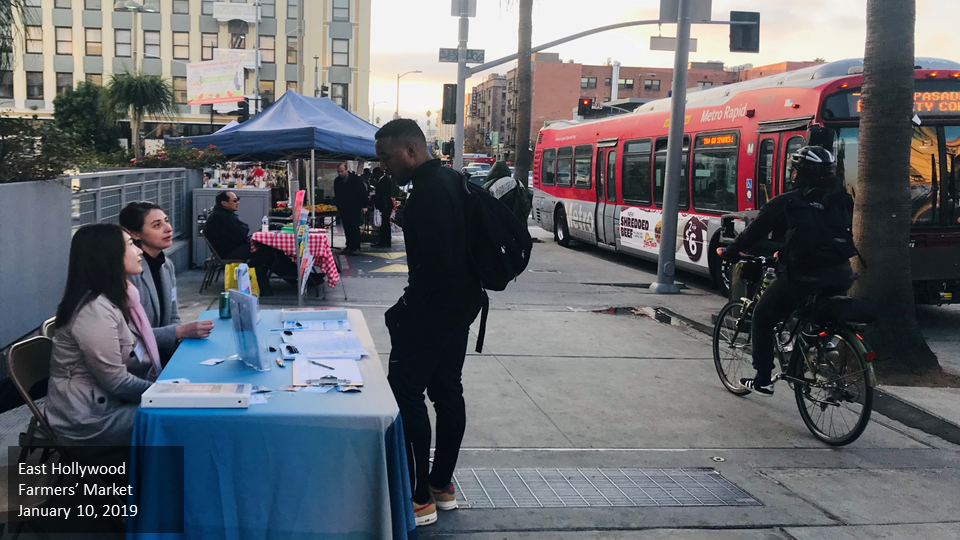 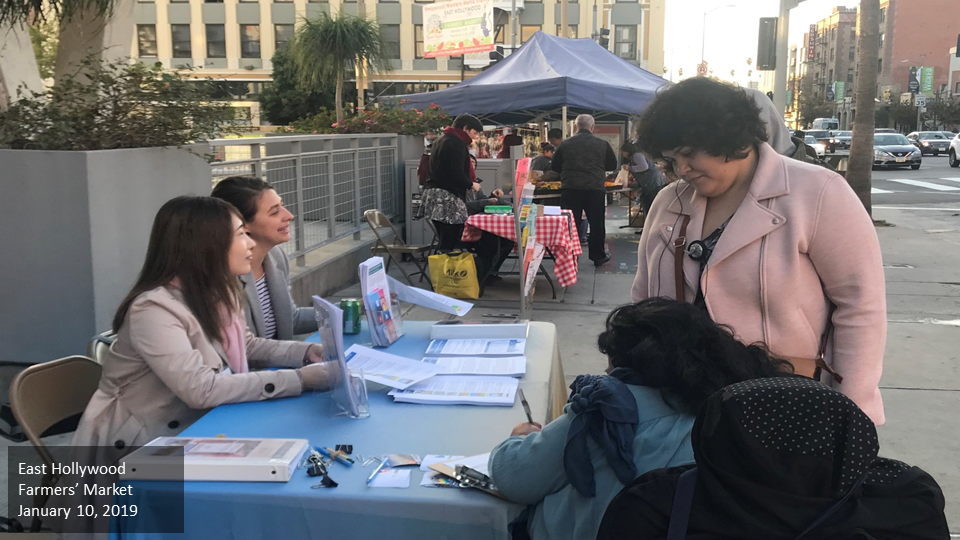 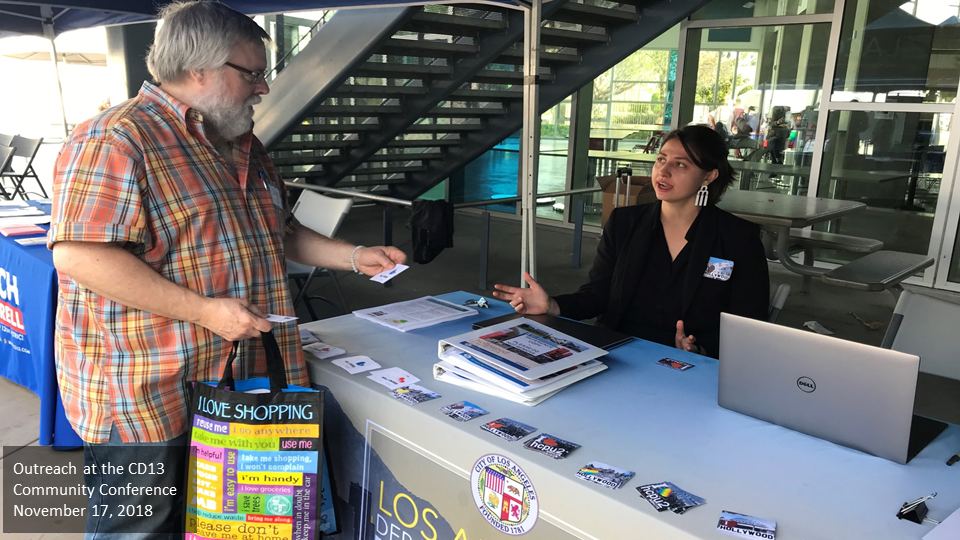 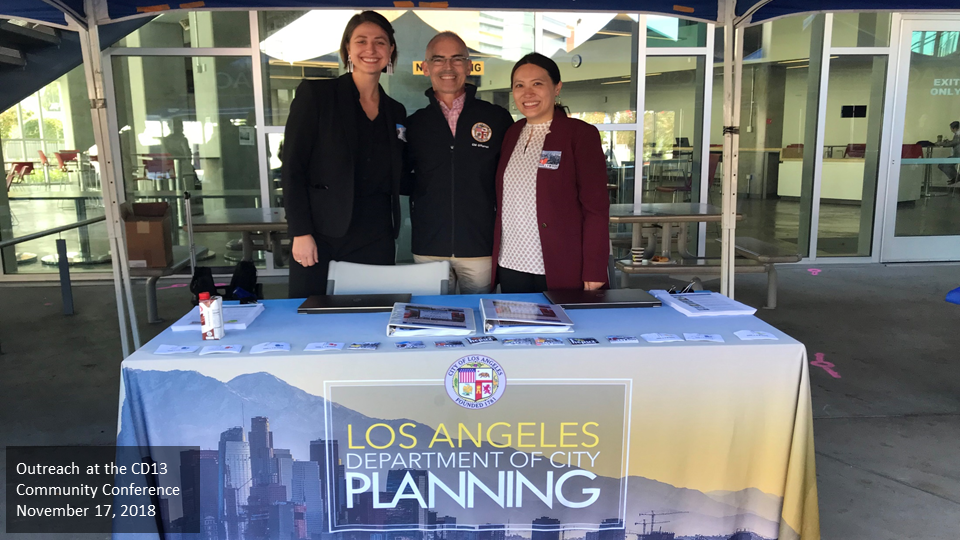 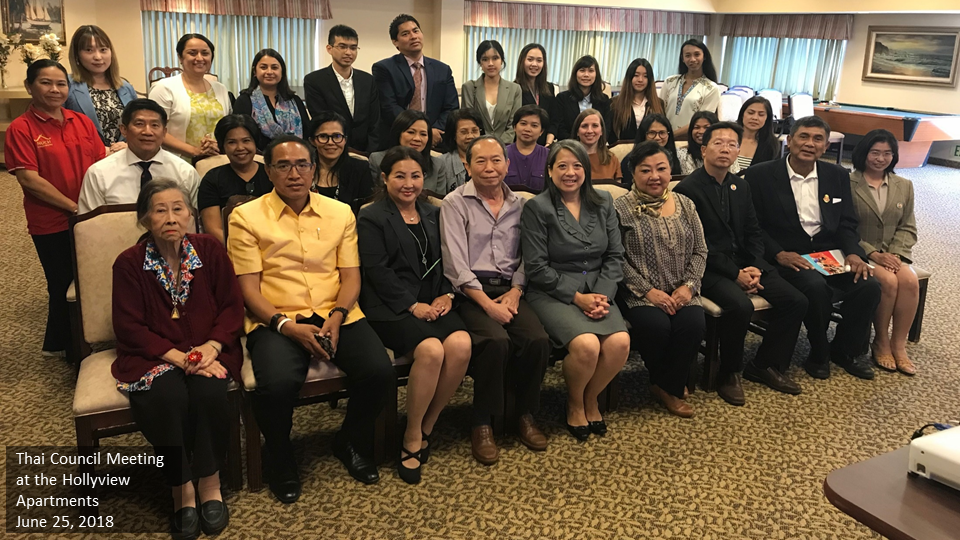 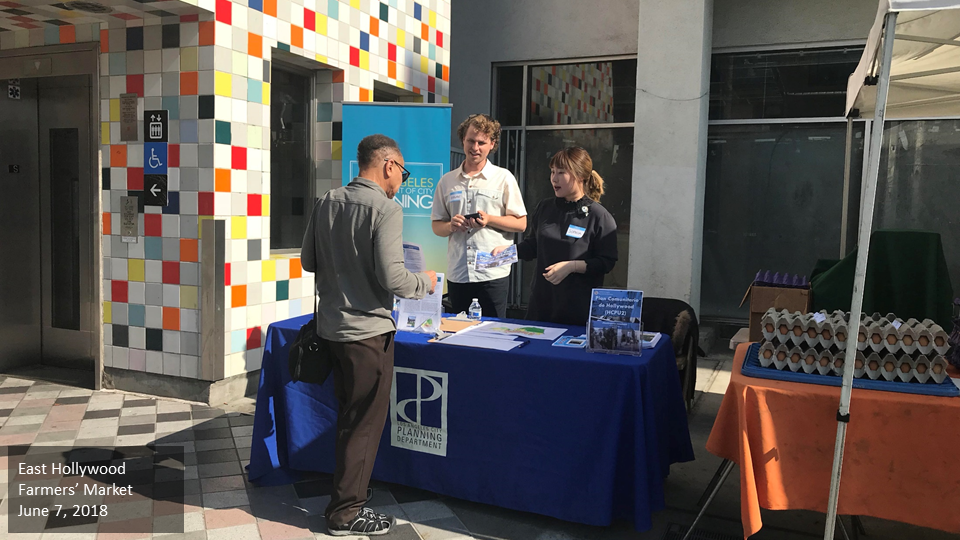 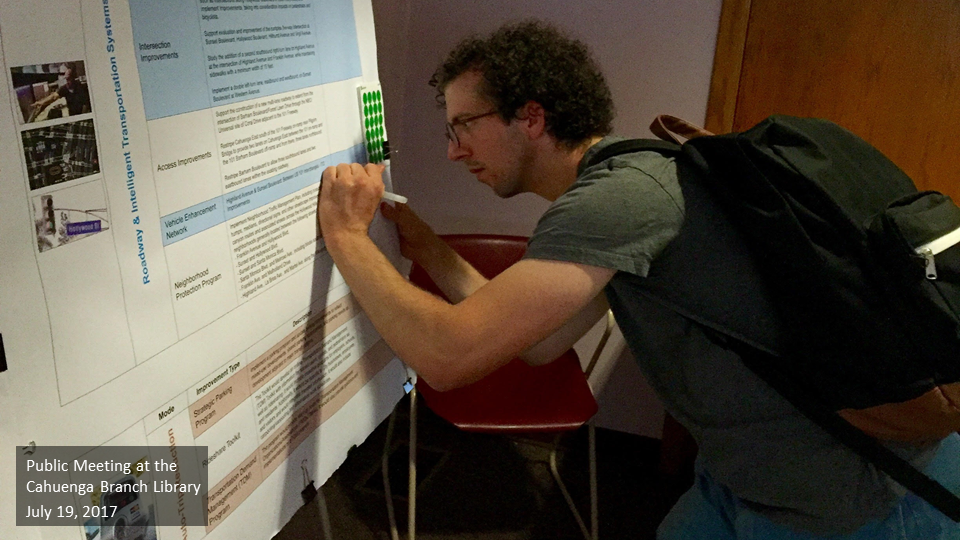 On December 9, 2020, the Hollywood Community Plan Update held a virtual Open House and Public Hearing. The Open House highlighted the Plan Update’s draft policy and zoning recommendations for topics such as housing, affordable housing, employment, historic preservation, and climate change. The Open House presentation is also available in Spanish. Comments expressed by stakeholders during the Public Hearing can be heard here.

Click here to view the shared materials during the virtual Open House.

In September and October of 2020, the team hosted 18 office hours to highlight the goals of the updated Draft Community Plan Implementation Overlay (CPIO) District, and discussed proposed incentives for affordable housing and proposed regulations for historic preservation and pedestrian-oriented design.

On August 18, 2019, planners spoke with residents and visitors about the Hollywood Community Plan Update. In June 2018, the Los Angeles Department of City Planning held two online webinars to provide an overview of the Hollywood Community Plan Update and to share information about ongoing opportunities to participate in the Plan Update process. A recording of the overview presentation from the June 14th webinar can be viewed below.

Materials presented at the meeting are available for review:
Webinar Power Point Slides

On June 25, 2018 City Planning staff provided a Planning 101 Training to the Thai Council. The training was intended to provide an overview of the basic elements of planning, land use and zoning. Links to the presentation slides and summary are provided below.

Materials presented at the meeting are available for review:

Materials presented at the meetings are available for review:
Display Boards
Presentation