As part of the Transit Neighborhood Plans program, City Planning is developing regulatory tools and strategies for the areas around five stations on the Metro Orange Line. These tools and strategies aim to encourage transit ridership, promote job creation, preserve or enhance current industrial uses, improve the urban built environment, and focus new growth and housing in proximity to transit and along key corridors. Each station area is distinct and will be planned contextually, with different intensities, land uses, design guidelines, and other strategies.

The Metro Orange Line (Line 901) is an 18-mile Bus Rapid Transit (BRT) line that operates in the San Fernando Valley. Bus service operates between the Chatsworth Metrolink Station in the Northwest Valley and the North Hollywood Metro Red Line Station in the Southeast, which connects the San Fernando Valley to downtown Los Angeles. Originally opened in 2005 and expanded in 2012, the line uses a dedicated bus right-of-way, separated from street traffic, for the majority of the line length. The Orange Line is one of the busiest bus rapid transit lines in the nation, with an average of 30,000 passengers every weekday. For more information on the Metro Orange Line, please visit here.

The Transit Neighborhood Plans for the Orange Line focus on three stations:

The North Hollywood Station is located at the intersection of Chandler and Lankershim Boulevards. It is a major transit hub, and the northern terminus of the Metro Red Line that connects the San Fernando Valley with downtown Los Angeles. The station is a short walk from the NoHo Arts District and North Hollywood Park, which includes a recreation center, a skate park, tennis courts, and the historic Amelia Earhart Regional Library. The study area is equal parts commercial and multiple-family residential, with very little single-family residential or industrial land. Larger commercial and office buildings are located along Lankershim and Chandler Boulevards, and smaller restaurants, shops, and auto businesses are located along Magnolia and Burbank Boulevards. The North Hollywood transit neighborhood contains a total population of approximately 44,178,* and 9722 jobs or 5.35 jobs per acre.** 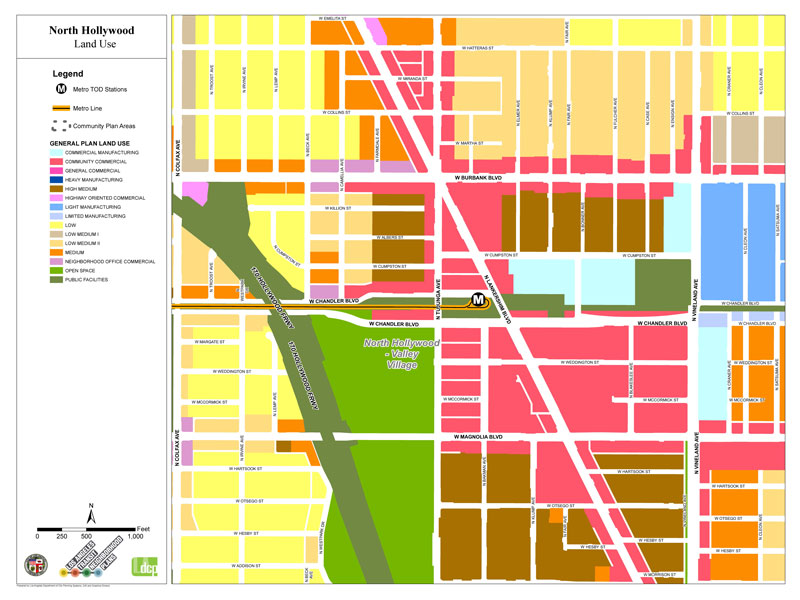 The Van Nuys Station is a short walk from the civic heart of the San Fernando Valley to the north, the Van Nuys Civic Center and City Hall, as well as Van Nuys Auto Row to the south. Located near the intersection of Van Nuys Boulevard and Oxnard Street, this station has approximately 42,290 individuals living within the station area.* The neighborhood north of the Orange Line is predominantly multiple-family residential with several one- and two-story restaurants and shops along Van Nuys Boulevard, while the area south of the Orange Line is predominantly single-family residential with auto-related businesses along Van Nuys Boulevard. There is also an industrial manufacturing belt along Oxnard and Bessemer Streets, with auto body shops, construction supply stores, and industrial spaces retrofitted to accommodate recording studios and creative office spaces. The area contains a total of approximately 9695 jobs, or 5.10 jobs per acre.** 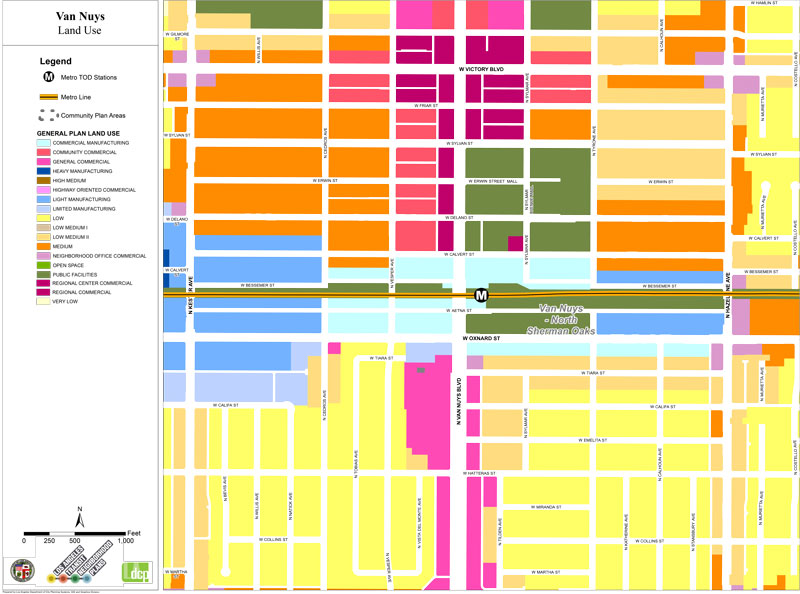 The Sepulveda Station is located a short walk from the intersection of Sepulveda Boulevard and Oxnard Street. Although the station is adjacent to Woodley Park and Sepulveda Basin Wildlife Reserve, the station and park are separated by the San Diego Freeway (I-405), and no pedestrian connectivity exists in the station area. Businesses along Sepulveda Boulevard are a mix of large-scale stores, such as Costco and Target, smaller strip malls, and a few office buildings. An industrial belt also runs alongside the Orange Line and Oxnard Street east toward the Van Nuys Station. Behind these uses are single-family residential neighborhoods, with very little multiple-family residential. The study area contains a total population of approximately 18,662,* and approximately 7258 jobs or 7.27 jobs per acre.** 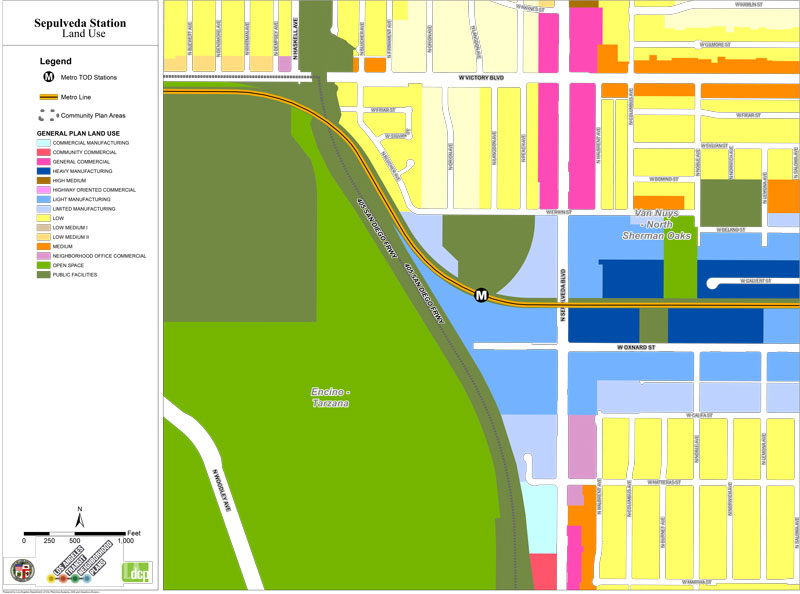 Two Orange Line stations in the West San Fernando Valley, Reseda Blvd. and Sherman Way, are also part of the Orange Line TNP program, but will be rezoned as a component of the Southwest Valley Community Plans Update Program, which includes the Reseda-West Van Nuys, Canoga Park-Winnetka-Woodland Hills-West Hills, and Encino-Tarzana Community Plans. These stations will be analyzed through the environmental review process for that program. For more information on the Southwest Valley Community Plan Update Program, please visit here.

Additionally, the Department of City Planning is completing a comprehensive revision of the City’s zoning code and developing new zones, known as re:code LA. Coupling the zoning code revision with the plan updates provides the Department with an opportunity to write policy and create implementation tools tailored to each station area, while supporting transit ridership, pedestrian-orientation, and sustainable neighborhoods throughout the South San Fernando Valley. For more information on the re:code LA project, please visit here.

The Orange Line Transit Neighborhood Plan, also referred to as the Orange Line TNP, is a long-range planning effort around three Metro Orange Line stations in the Eastern San Fernando Valley to regulate land uses, zoning, and design of new development. The Orange Line TNP aims to foster a mix of uses around the transit stations that will encourage transit use and improve mobility for everyone. Directing new housing and jobs to transit-served areas is an overarching principle of the City’s General Plan, with the goal of providing residents and employees greater mobility choices and reducing automobile dependence and greenhouse gas emissions that contribute to poor air quality and climate change. 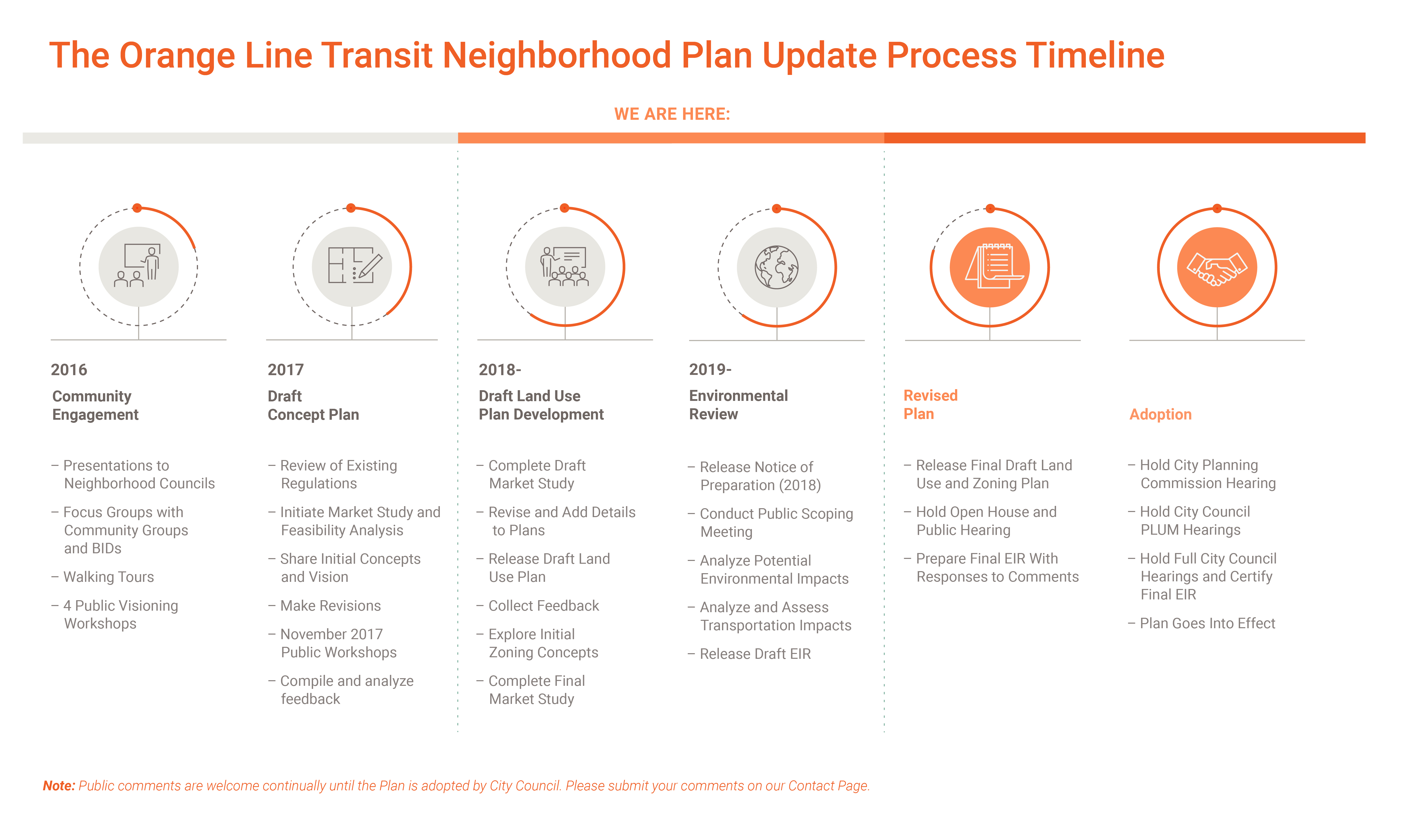 What properties are affected by this Project?

The Orange Line TNP Study Area consists of two non-contiguous portions of land, one measuring approximately 4.5 square miles (surrounding Van Nuys and Sepulveda stations) and one measuring approximately 2.85 square miles (surrounding North Hollywood station). While all of this area will be studied for the purposes of environmental review, land use and zone changes will likely only apply to select parcels within an approximately 0.5-mile radius of each station. The Study Area is shown on the map below. 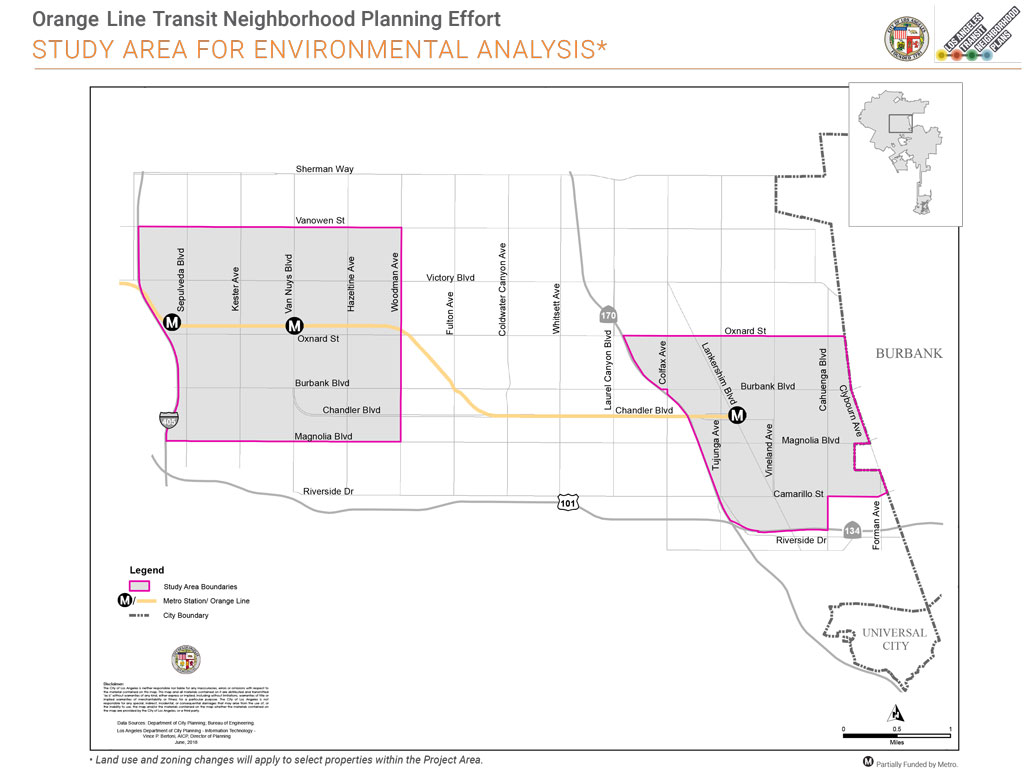 Each station area will be given contextual treatment as outlined by the Corridor Vision document, which can be found here.

What are the components of this planning effort?

The Orange Line TNP is not a Specific Plan. This planning effort will apply new zones in select parcels around the three Orange Line TNP stations. The new zones will regulate uses, form, intensity of development, and design to maintain and improve the aesthetic quality and character of Orange Line TNP neighborhoods, and ensure compatibility between new developments and the existing context.

What does this Project regulate?

Through the use of the new zoning code, the Orange Line TNP effort can regulate:

Future proposed development utilizing the new zoning code would be subject to affordable housing provisions as well as a variety of public benefits, such as publicly accessible open space, transit amenities, and vehicle trip reduction for commercial projects in exchange for development incentives.

Will anything be built as a result of this planning effort?

The Orange Line TNP planning effort sets the range of uses and the size of new development allowed in proposed subareas within the study area and does not propose any development projects. Under the Orange Line TNP, each proposed development project would continue to go through development permitting processes.
To see the latest project documents for the Orange Line Transit Neighborhood Plan, including notes and presentations, visit the “Updates” tab of this website. As this is a work in progress, we encourage your input on these concepts. You may send a message to Planning staff directly via email or mail (see Contact Us page for information).

The environmental review process, outlined in the diagram below, began with a Notice of Preparation (NOP) issued on July 11, 2018 along with a public Scoping Meeting held on July 25, 2018. The comment period was from Thursday, July 12, 2018 to Wednesday, August 15, 2018.

Materials from the Scoping Meeting may be found below the diagram. 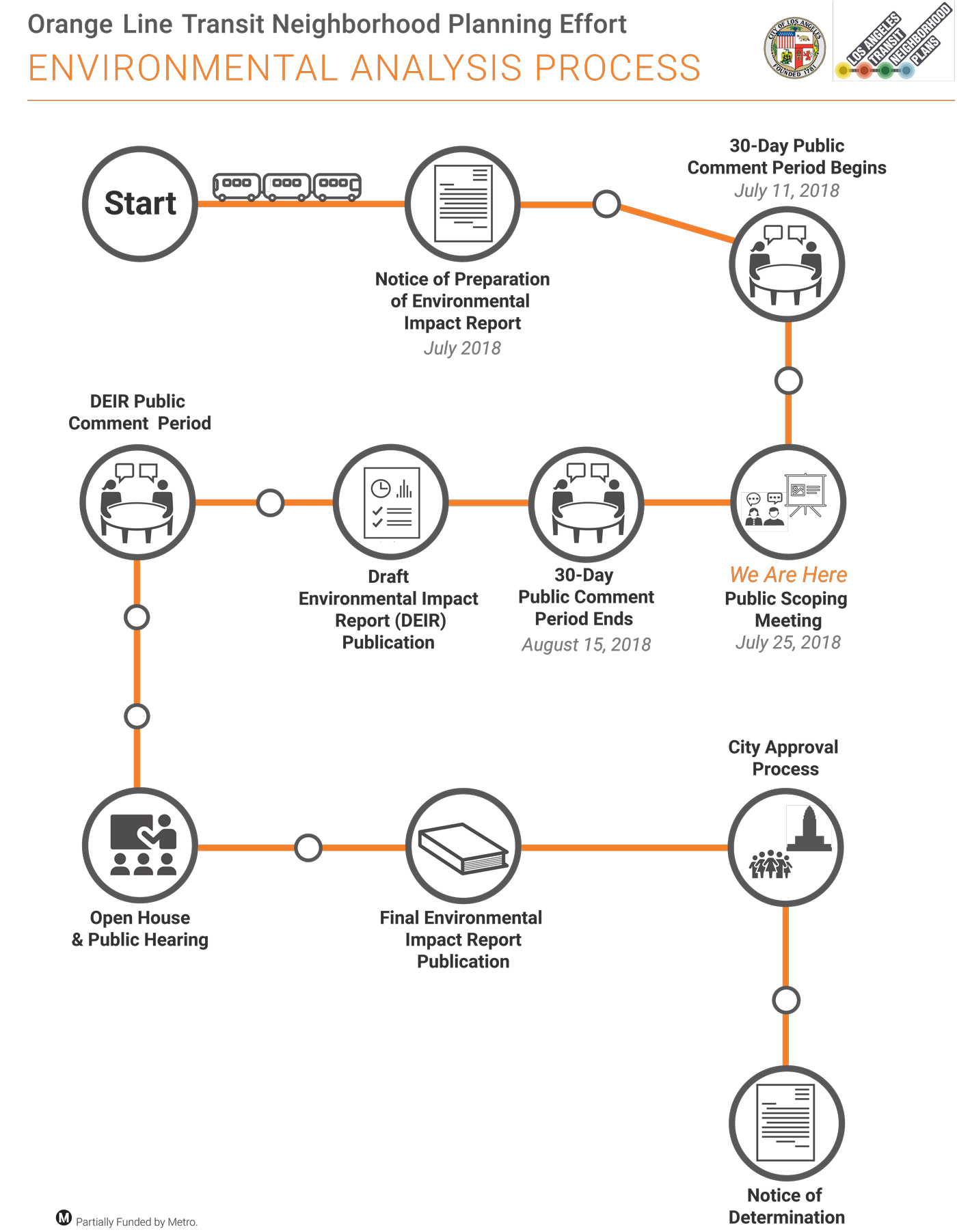 Below are the latest project documents for the Orange Line Transit Neighborhood Plan, including notes and presentations. As this is a work in progress, we encourage your input on these preliminary recommendations. You may send a message to Planning staff directly via email or mail (see Contact Us page for information).

We hope to post a preliminary draft plan for the Orange Line Transit Neighborhood Plan in late 2019 or early 2020, and will conduct further meetings and public hearings at that time.