As part of the Transit Neighborhood Plans program, City Planning is developing regulatory tools and strategies for the areas around the Purple Line Phase 1 Extension stations at Wilshire/La Brea, Wilshire/Fairfax, and Wilshire/La Cienega. These tools and strategies aim to encourage transit ridership, promote job creation, enhance the urban built environment, and focus new growth and housing in proximity of transit and along corridors while protecting the character of single-family neighborhoods.

The first phase of the three-phase extension began construction in 2014 and is anticipated to open by 2023, and includes the following new stations:

The Wilshire/La Brea Station is the first of the three new stations of the Purple Line Extension. The residential neighborhoods of Park La Brea, Hancock Park, and Miracle Mile surround the station, with corridors of active commercial, retail, and office space located along Wilshire Boulevard and La Brea Avenue.

The Wilshire/Fairfax station is located in the Miracle Mile neighborhood, adjacent to several major city landmarks including the La Brea Tar Pits and the Los Angeles County Museum of Art (LACMA). The station is located at the intersection of the main commercial corridor on Wilshire Boulevard, which has several medium- and high-rise commercial and office buildings, and smaller-scale Fairfax Avenue, which has several single-story restaurants and stores. There are also several multiple-family and single-family residential neighborhoods near the station, including Park La Brea and Carthay Circle.

The station is located within the Wilshire Community Plan Area, with portions of it additionally located in special districts such as the Miracle Mile Community Design Overlay, the Carthay Circle Historic Preservation Overlay Zone, and the Beverly Grove Residential Floor Area district.

The station area within the City of Los Angeles is located in the Wilshire Community Plan Area, with portions of it additionally located in special districts such as the Miracle Mile Community Design Overlay, the Carthay Circle Historic Preservation Overlay Zone (HPOZ), the South Carthay HPOZ, and the Beverly Grove Residential Floor Area district.

The Purple Line Transit Neighborhood Plan, also referred to as the Purple Line TNP, is a long-range planning effort around three future Metro Purple Line subway extension stations in the Wilshire area at: Wilshire/La Brea, Wilshire/Fairfax, and Wilshire/La Cienega to regulate land uses, zoning, and design of new development. The Purple Line TNP aims to foster a mix of uses around the transit stations that will encourage transit use and improve mobility for everyone. Directing new housing and jobs to transit-served areas is an overarching principle of the City’s General Plan and the Wilshire Community Plan, with the goal of providing residents and employees greater mobility choices and reducing automobile dependence and greenhouse gas emissions that contribute to poor air quality and climate change.

What properties are affected by this Project?
The Purple Line TNP study area encompasses the areas within the City of Los Angeles generally within a half-mile radius of the Purple Line Extension stations on Wilshire at La Brea, Fairfax, and La Cienega. Land use and zone changes are currently proposed for select commercial and multifamily parcels near the stations.

What does this Project regulate?
Through the use of the new zoning code, the Purple Line TNP effort can regulate:

Future proposed development utilizing the new zoning code would be subject to affordable housing provisions as well as a variety of public benefits, such as publicly accessible open space, transit amenities, and vehicle trip reduction for commercial projects, in exchange for development incentives.

For the latest plan updates, visit the "Updates" tab.

The environmental review process, outlined in the diagram below, began with a Notice of Preparation (NOP) issued on July 12, 2018 along with a public Scoping Meeting held on July 26, 2018.

Materials from the Scoping Meeting may be found below: 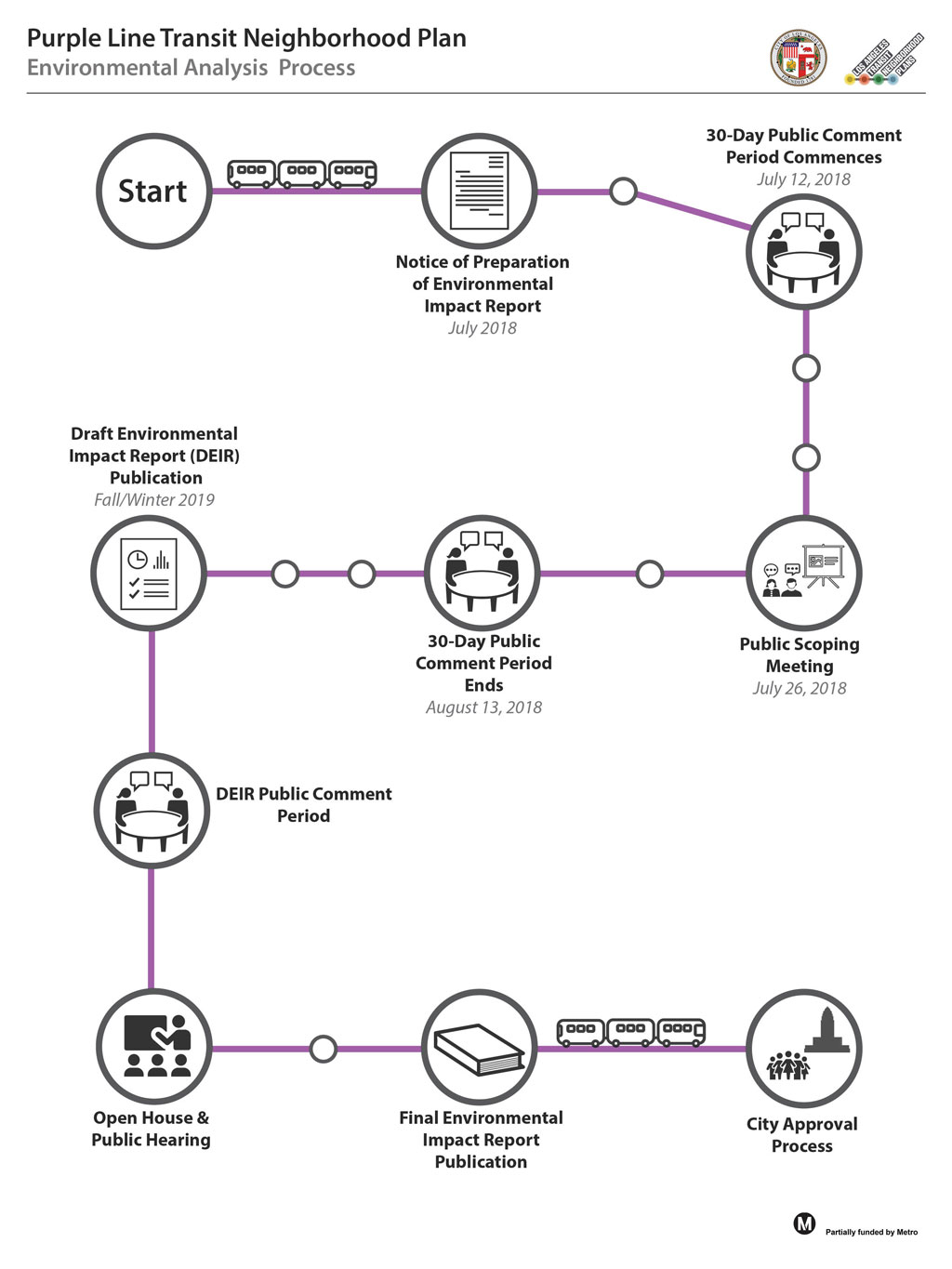 Throughout 2020, the COVID-19 pandemic altered everyday life in Los Angeles, underlining the importance of maintaining a sense of community, both as a nation and as Angelenos. City Planning continues to work and maintain operations while being adaptable and responsive. As part of assessing our work programs given a reduction in resources, we are aligning some efforts while fostering more inclusive and equitable strategies to support community engagement and input on core policies.

During the Summer of 2020, Los Angeles City Planning shared a Project Summary Report and interactive StoryMap for the Purple Line Transit Neighborhood Plan (TNP). The report highlighted revisions to the planning concepts that were informed by stakeholder input received throughout the project thus far, including the 2019 workshops, office hours, community survey, and numerous comments.

With respect to the work completed thus far on the Purple Line TNP, we anticipate continuing the conversation where things have paused, and call your attention to the links provided above. We remain committed to this work program even with the economic and staffing impacts that have resulted as a result of this pandemic.

We would like to thank you for your involvement in the Purple Line TNP and hope that you will continue to work with us on this effort when we resume work on this project in the near future. In the meantime, while we will not be actively working on this project, feel free to submit any comments or questions to Matt Gamboa via email to matt.gamboa@lacity.org.

Below are the latest project documents for the Purple Line Transit Neighborhood Plan, including notes and presentations. As this is a work in progress, we encourage your input on these preliminary recommendations. You may send a message to Planning staff directly via email or mail (see page for information).

Please sign up to stay up-to-date on the progress of this important neighborhood planning initiative. 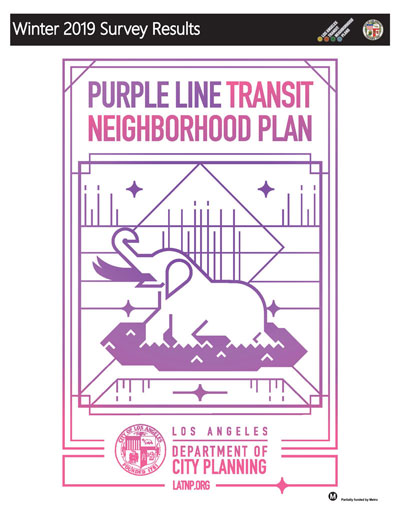 In February and March of 2019, in conjunction with the Winter 2019 community engagement efforts, City Planning staff conducted an online survey regarding the Purple Line Transit Neighborhood Planning effort. The goal of the survey was to assess stakeholders’ opinions regarding the project and related issues pertaining to housing, mobility, and urban design.

Thank you for your comments!

Staff shared the below Plan Summary Handout. While the Handout contains much of the information that has been previously shared with stakeholders, it also includes revisions to the planning concepts that were informed by input received throughout this project thus far, including the 2019 workshops, office hours, and community survey.

This summer Los Angeles City Planning shared a Project Summary Report and interactive StoryMap for the Purple Line Transit Neighborhood Plan (TNP). The report highlighted revisions to the planning concepts that were informed by stakeholder input received throughout the project thus far, including the 2019 workshops, office hours, community survey, and numerous comments. 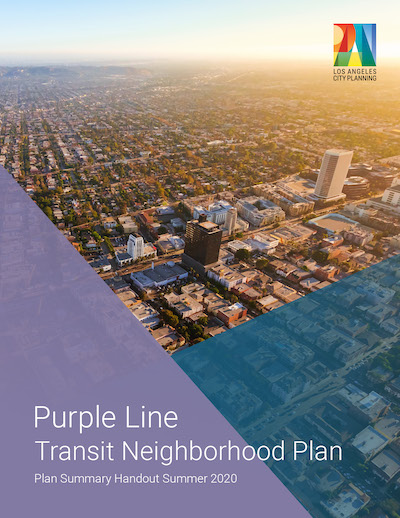 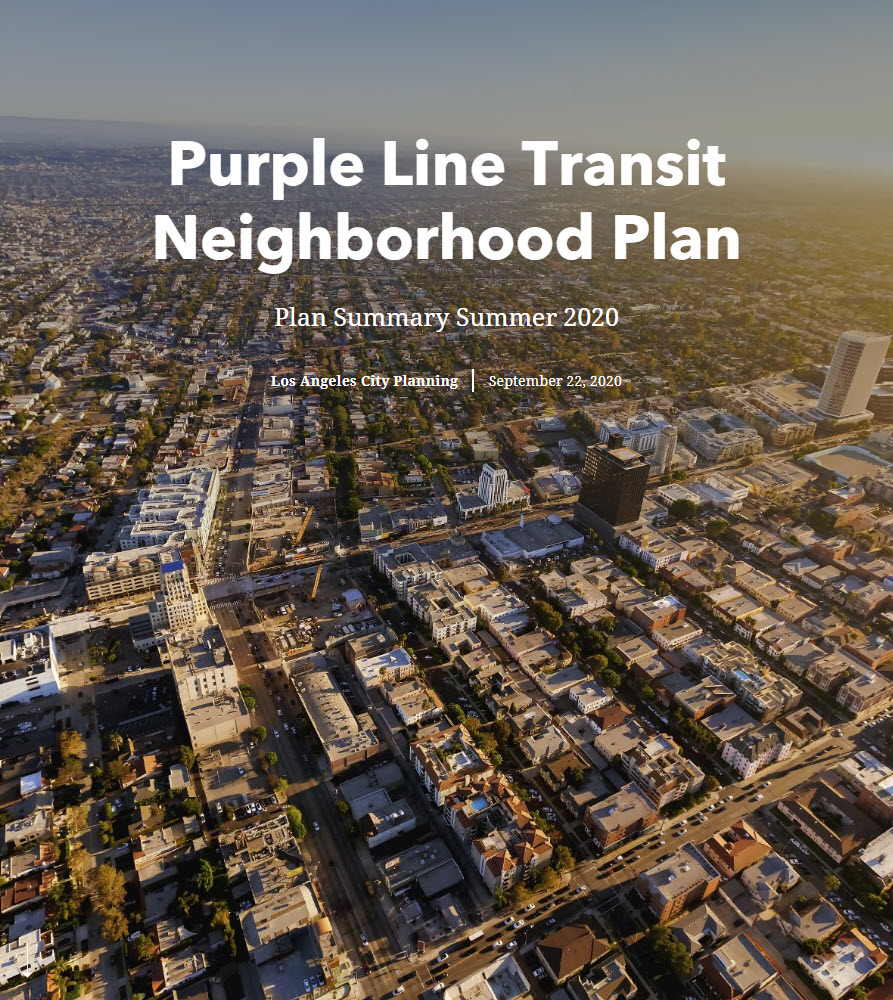