Metro awarded the Los Angeles City Planning Department a three-year grant for land use planning along and around Metro’s Active Transportation Rail to River Corridor Project. The Slauson Corridor Transit Neighborhood Plan (Slauson Corridor TNP) will identify land use, zoning, and urban design strategies to examine opportunities related to employment and industry, and to improve access to the future Rail to River Corridor and Metro stations along the Blue Line, Silver Line, and Crenshaw/LAX Line.

The Community Plans examine land use and zoning and set goals, policies, and programs to effectively guide sustainable growth and development, while also taking into account the unique history, sense of identity, and current and future needs of the three Community Plan Areas. The Slauson Corridor TNP takes cues from policies and programs in the adopted Community Plans to study employment opportunities on industrial lands and how jobs can benefit existing communities and community members.

The CPIOs implement the goals of the Community Plans by establishing subareas with varying levels of regulations related to building design, permitted land uses, and, in some cases, tailored incentives.

Currently, the CPIOs outline additional land use regulations that affect some parcels in the Slauson Corridor TNP study area. With respect to the TNP effort’s goals of industry and employment, building design, and compatible land uses, the Slauson Corridor TNP will examine and amend existing provisions in the CPIOs, or create new provisions, to take into account the future Active Transportation Rail to River Project and Metro stations.

The Slauson Corridor TNP seeks to:

The Slauson Corridor TNP has not released an official draft plan with technical zoning details and is currently still in the Concepts phase. Planning concepts that reflect outreach efforts thus far, and present initial concepts to inform potential land use and zoning changes in the future, are now available for review. Check out the resources below to learn more about the concepts and complete the Planning Concepts Survey to share your input.

View the StoryMap on your phone, tablet, or desktop computer

A component of the Land Use Element. It focuses on a particular area or community within the City. (e.g. West Adams - Baldwin Hills – Leimert, South Los Angeles, Southeast Los Angeles)

The number of residential units permitted per square foot of land.

The ratio of the gross floor area of a building to the area of the lot where it is located.

Specialized zoning tools that implement the policy goals and objectives associated with a Community Plan by further regulating different aspects of proposed projects.

Zoning determines the uses permitted on a parcel 3 provides regulations for development, including height, bulk and setbacks.

Community feedback summaries of the Concepts Webinar and Survey are now available.

Check back soon for future events.

Summer 2020
The Slauson Corridor TNP team followed up to the Concepts Webinar by further encouraging stakeholders to share input on the Planning Concepts Survey. This includes attendance at virtual meetings hosted by the six Neighborhood Councils that intersect the study area.

Spring 2020
The Slauson Corridor TNP team hosted a Concepts Webinar on Wednesday May 20, 2020 with over 230 community stakeholders in attendance. Check out the resources below to view a recording of the webinar and complete the Planning Concepts Survey to share your input. A concepts webinar summary will be made available soon.

Winter 2020
The Slauson Corridor TNP team is continuing to work with its market study consultant to hear from local stakeholder groups about employment in the study area. The team is also making progress toward selecting a consultant for the environmental review process. The team has also compiled the many comments from its outreach efforts thus far (check out the summary in English or Spanish from our April 2019 workshops and early outreach efforts).

Fall 2019
The Slauson Corridor TNP team is continuing to work with its market study consultant to hear from local stakeholder groups about employment in the study area. The team is also making progress toward selecting a consultant for the environmental review process. The team has also compiled the many comments from its outreach efforts thus far (check out the summary in English or Spanish from our April 2019 workshops and early outreach efforts).

Summer 2019
The Slauson Corridor TNP team is working with an economic planning firm on a market study to help examine the viability of emerging industries and employment for the study area. The team will also take preliminary steps to determine what type of environmental review is appropriate, per the California Environmental Quality Act (CEQA).

The State’s TCC Program awarded a Planning Grant to the South LA Climate Commons Collaborative, who scored the highest amongst all the other cities that applied for this round of grant funding. Slated to launch in mid-2019, the grant funding will go toward community-led outreach and research that will result in a South Los Angeles Climate Commons Plan to guide recommendations and support future implementation funding opportunities. 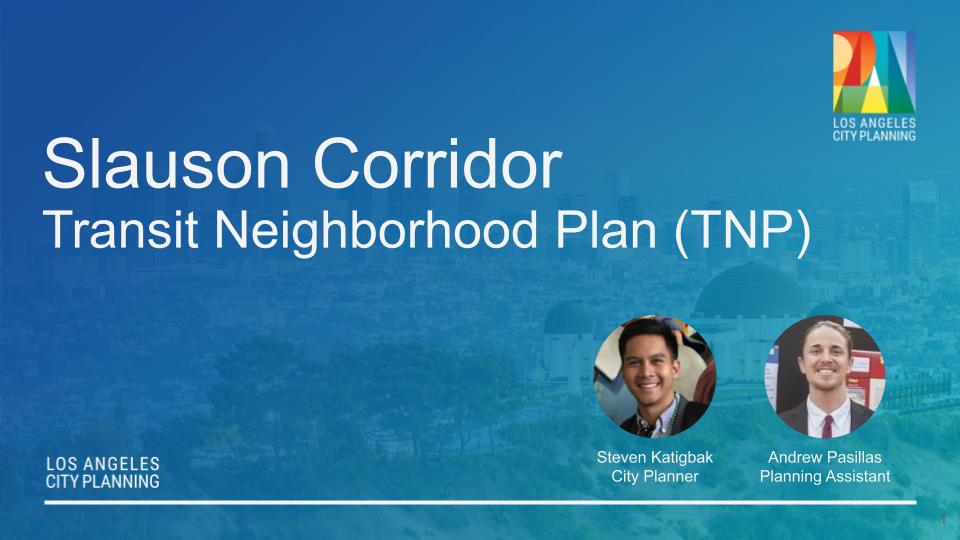 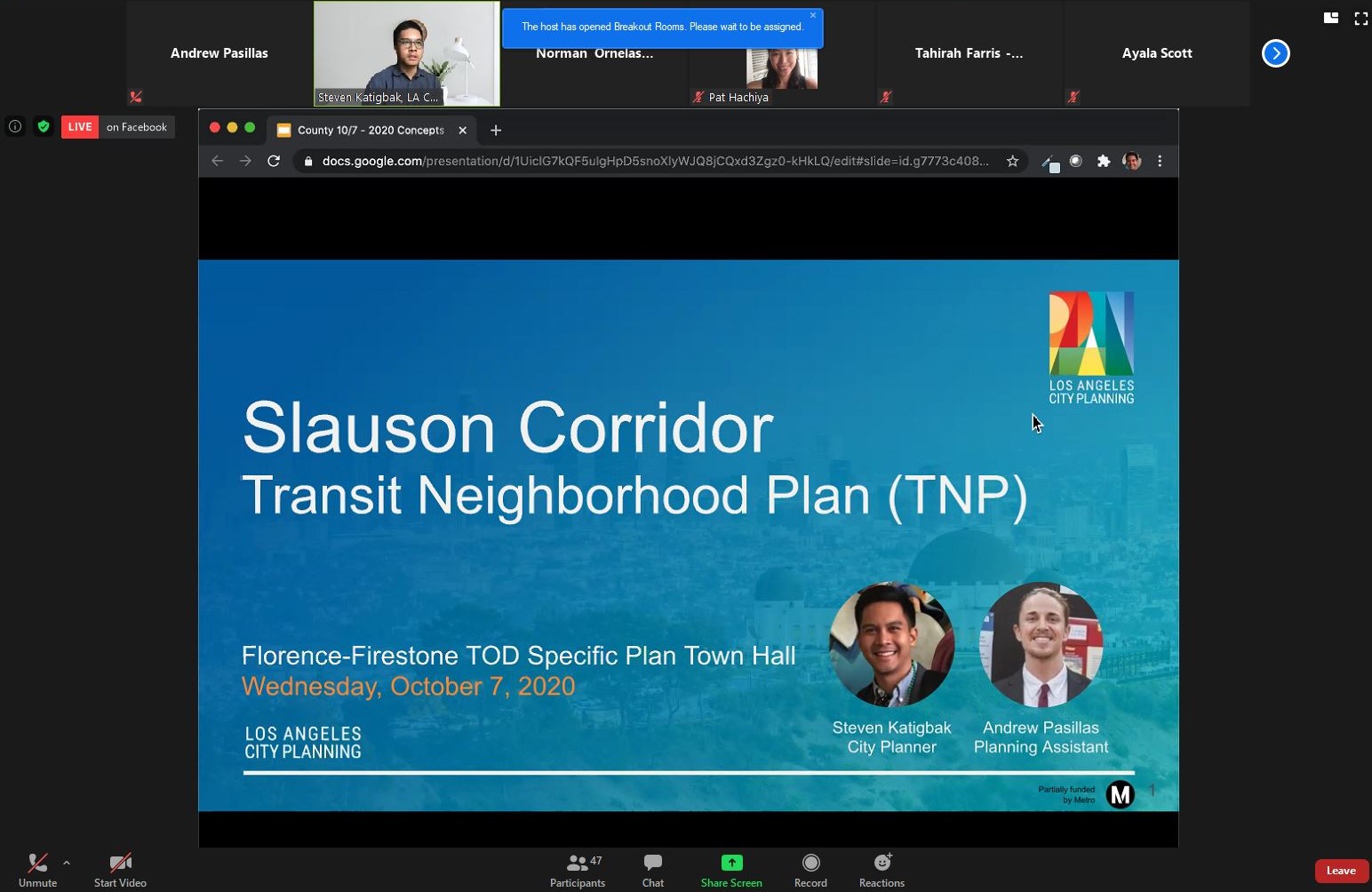 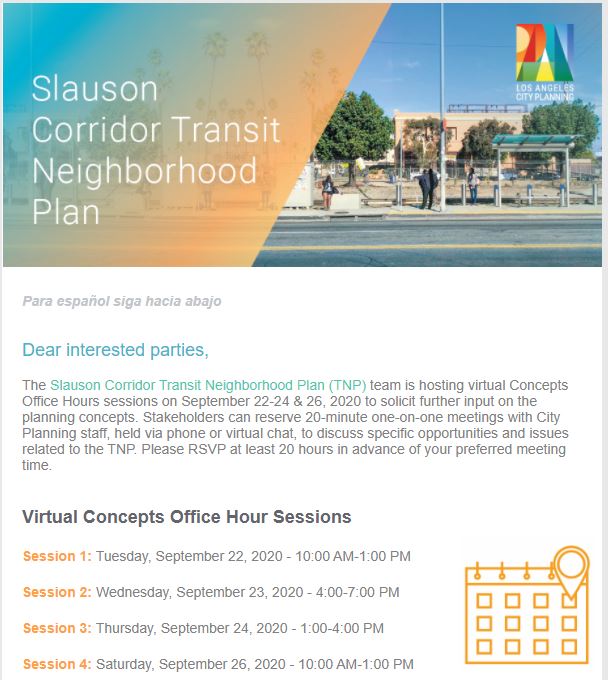 Concepts Office Hours
To solicit further input from community stakeholders on the concepts, 24 half-hour virtual office hour sessions were held between September 22-24 and 26, 2020. 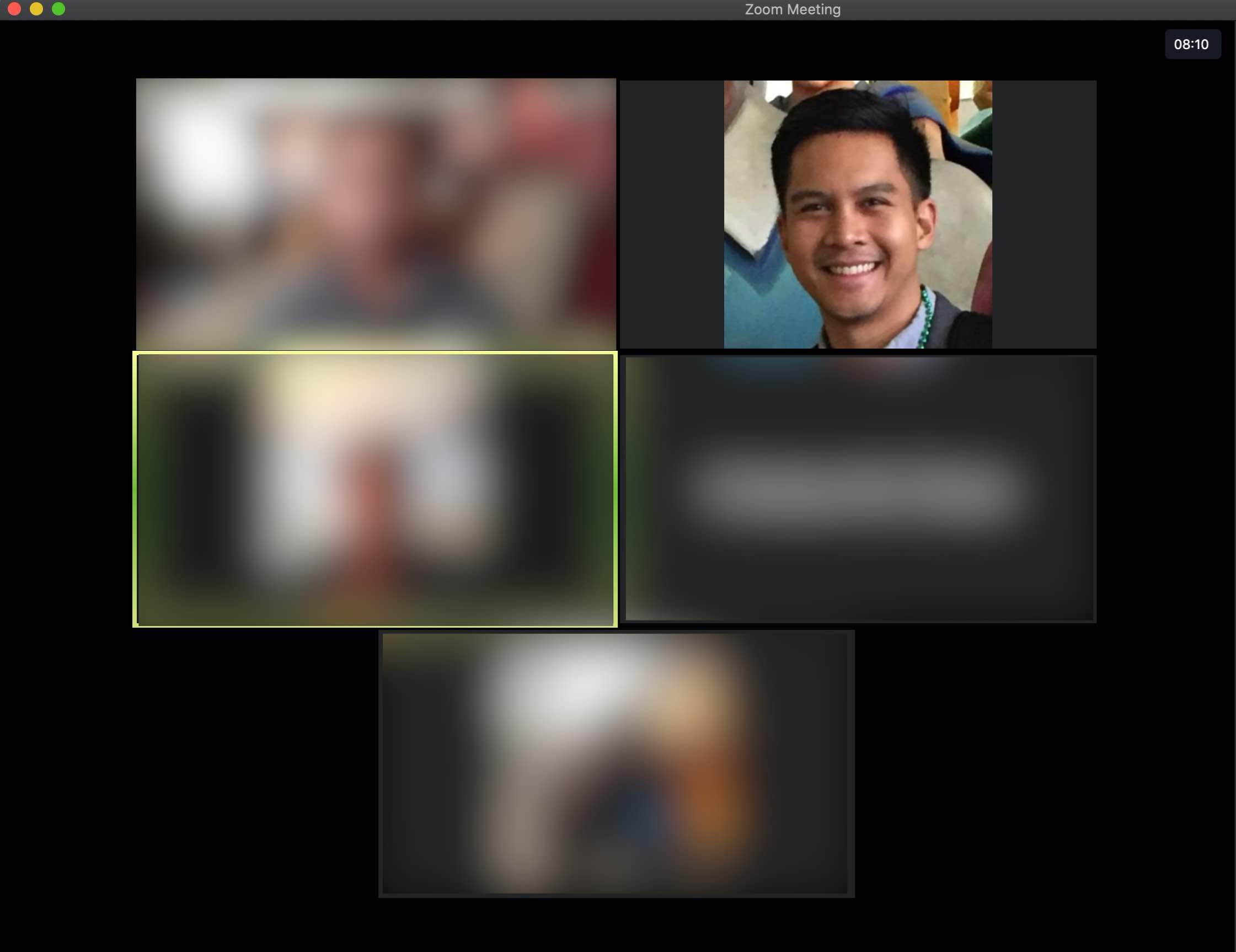 Virtual meetings hosted by the following Neighborhood Councils were attended: 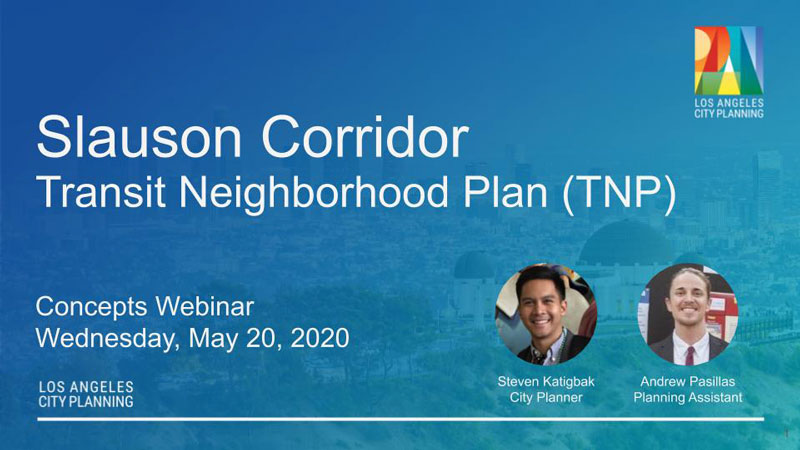 Planning Concepts Webinar
On May 20, 2020, we hosted an online webinar from 1:00 to 2:00 PM to share what we’ve heard from our outreach efforts thus far, and present initial planning concepts to inform potential land use and zoning changes in the future. Over 230 stakeholders participated and provided nearly 200 comments and questions. 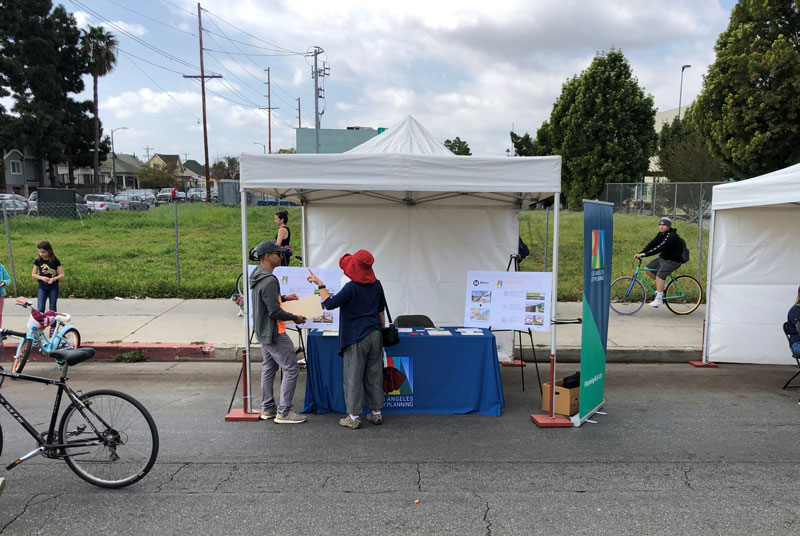 CicLAvia—South LA
On February 23, 2020, we hosted an informational booth at the Central Avenue hub during the daylong CicLAvia—South LA event. The Slauson Corridor TNP team engaged with community members of all ages and previewed planning concepts to be featured in future upcoming public outreach events hosted by Los Angeles City Planning. 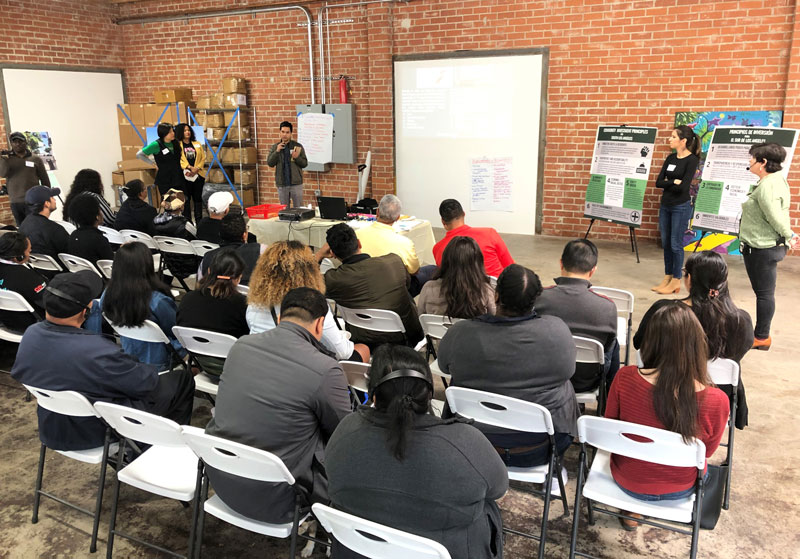 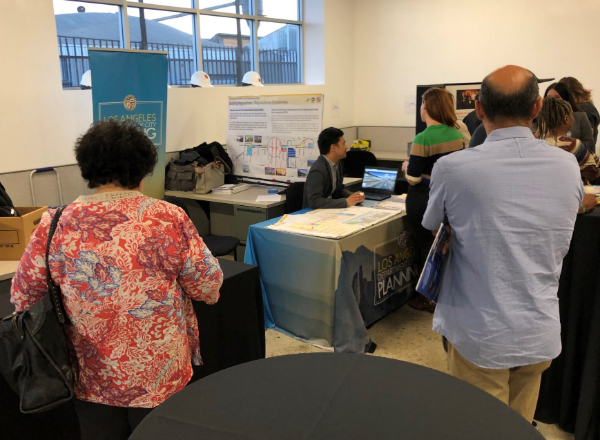 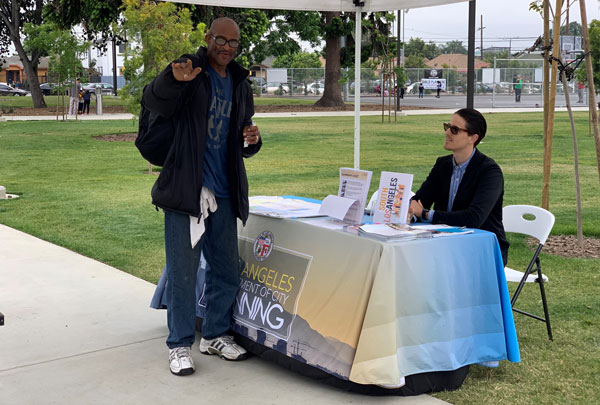 LADOT Vision Zero – South LA Open House
On Thursday, June 6, 2019, we joined the Department of Transportation (LADOT) at their South LA Open House to hear about the ways traffic safety is being improved throughout South LA. The Slauson Corridor TNP team was stationed at a booth, where we spoke with community members wanting to learn more about the project and how it connects with LADOT efforts. 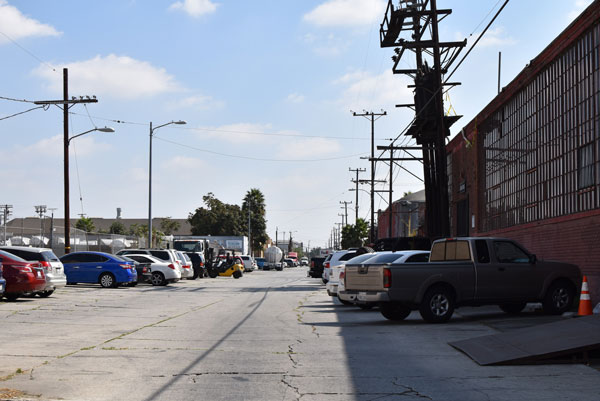 Market Study
In May 2019, we launched the market study component of the Slauson Corridor TNP work program. Using community input on what the future of industry and employment should look like in and around the Slauson corridor, an economic planning consultant will assist staff with analyzing what types of potential emerging industries can benefit the community. This exercise is an important piece of developing an understanding of potential land use changes and regulations.

If you have any questions or would like to provide additional input, please contact us at steven.katigbak@lacity.org (cc: andrew.pasillas@lacity.org). 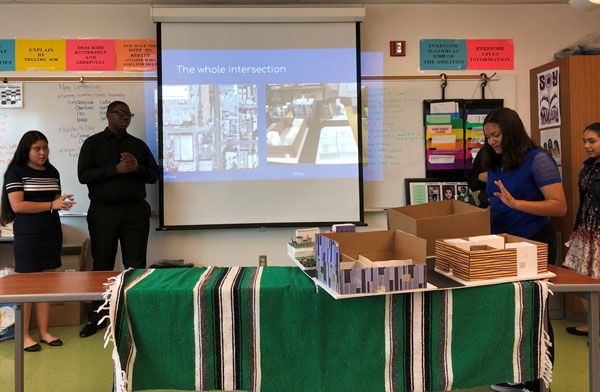 Rebuild Healthy LA Project
On Wednesday, April 24, 2019, the Community Health Advocates School (CHAS) at Augustus F. Hawkins High School invited Planning staff to present to students who were working on a long-term class project focused on ways to improve community issues around their school. Students used the information learned to develop solutions around specific problematic intersections in their community. We rejoined the CHAS on Tuesday, May 14, 2019 to judge the final projects and provide feedback. 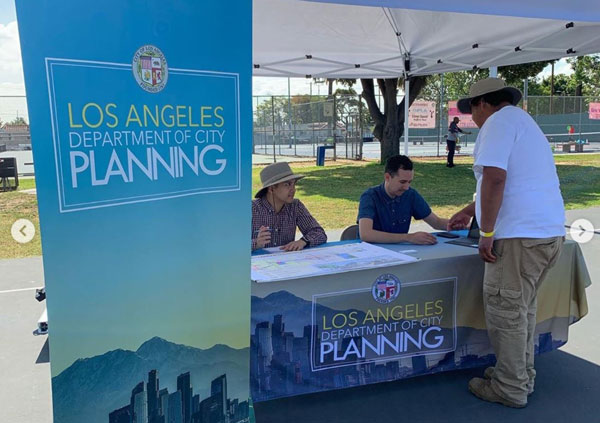 Community Bike Ride & Skate Jam
On Saturday, May 11, 2019, we had an informational booth at the American Heart Association’s Community Steps event at Jackie Tatum Harvard Park. We spoke with community members interested in opportunities to better connect active transportation and land use. 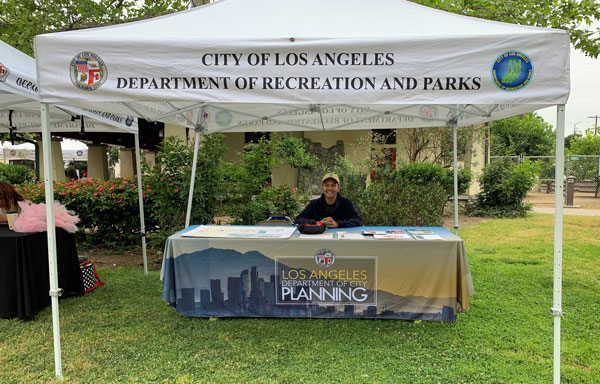 Earth Day Celebration
On Saturday, April 27th, 2019, the Slauson Corridor TNP team was at the annual Earth Day Celebration at Augustus Hawkins F. Nature Park. We heard great ideas from the community and shared information on how to continue to stay involved in our planning process. 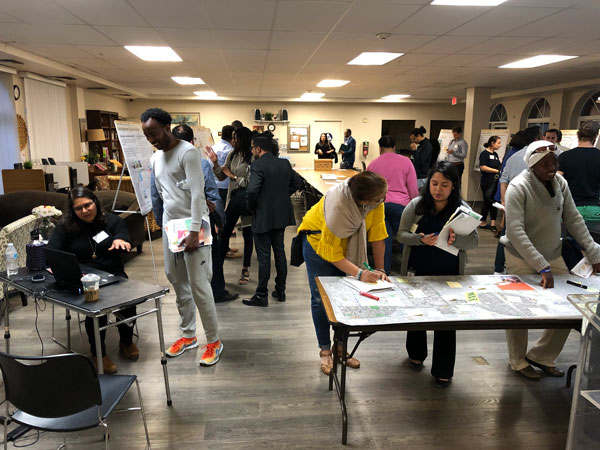 April 2019 Workshops
On Wednesday, April 3 and Saturday, April 6, 2019, we held workshops to gather community feedback on what industries can support local employment opportunities, how to best promote improved mobility and access through building design, and what types of land uses are desired along the Slauson corridor. 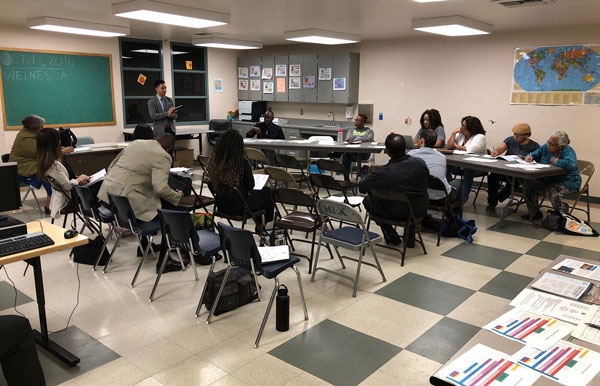 Meetings were held with the following Neighborhood Councils:

Outreach material from the meetings is provided below. We look forward to connecting with additional Neighborhood Councils in 2019! 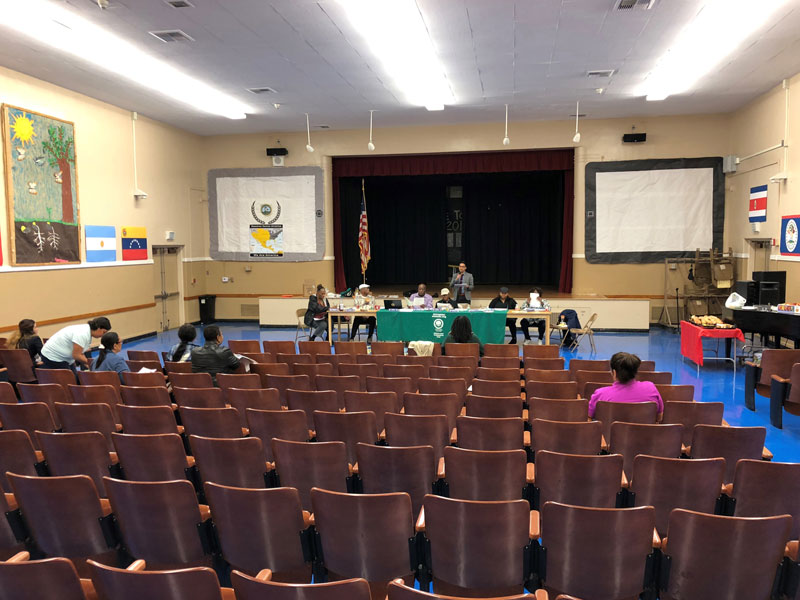 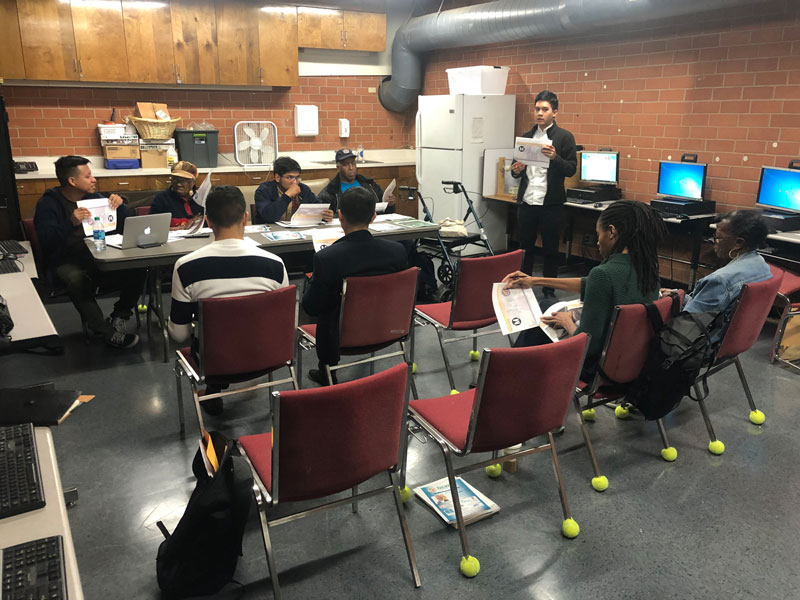 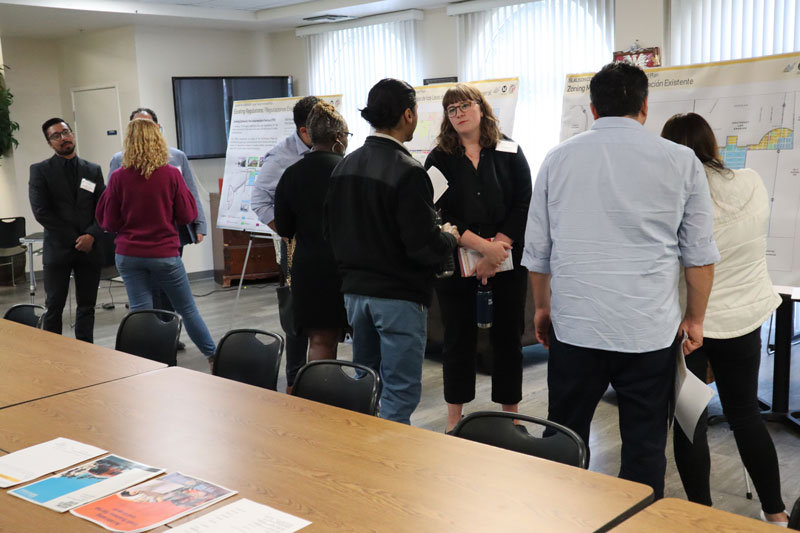 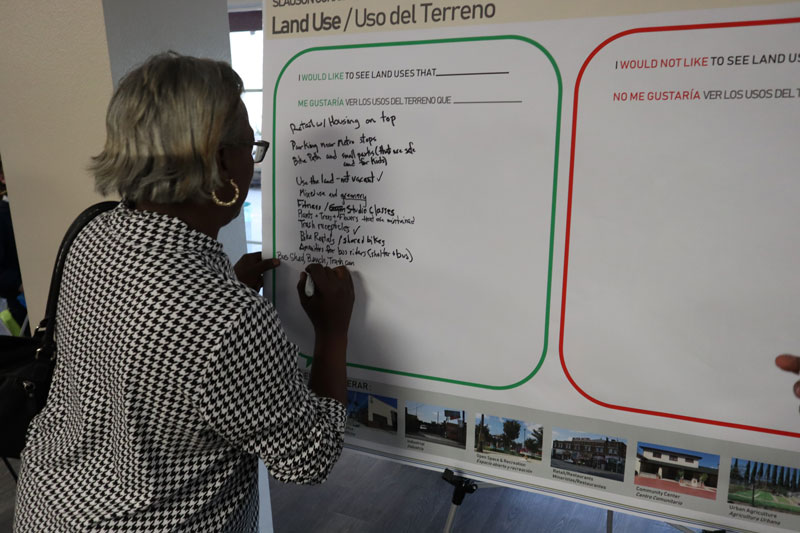 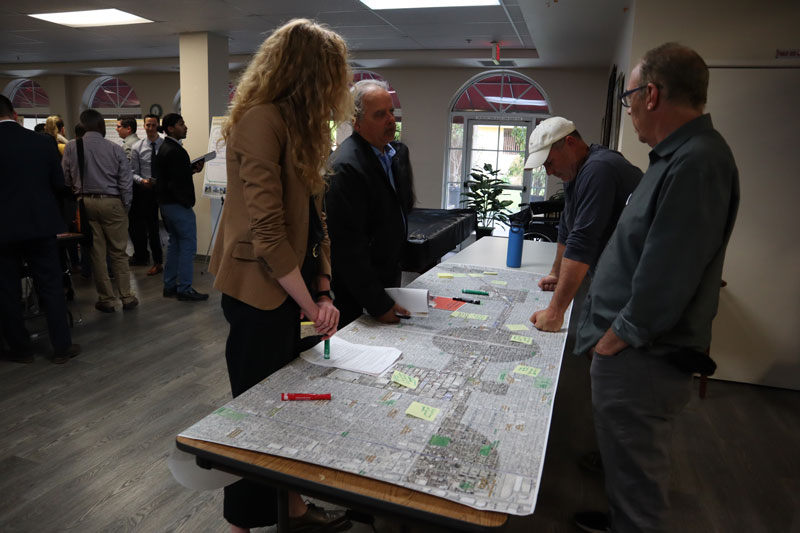 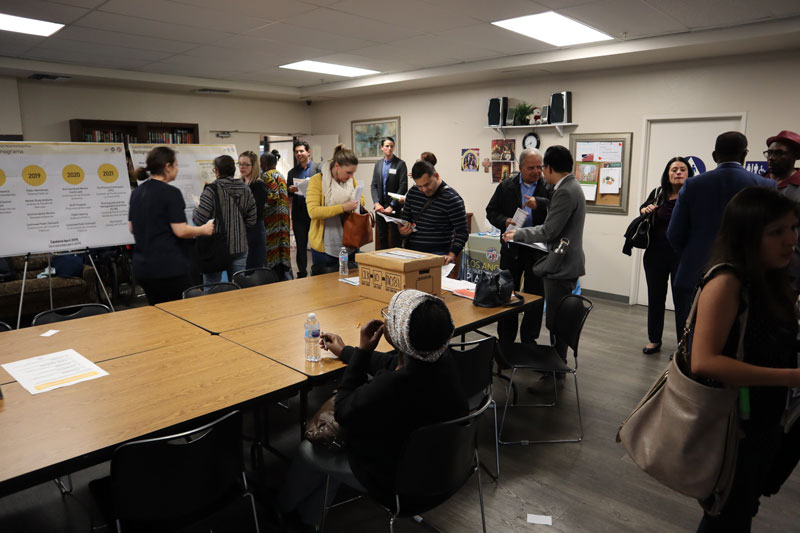 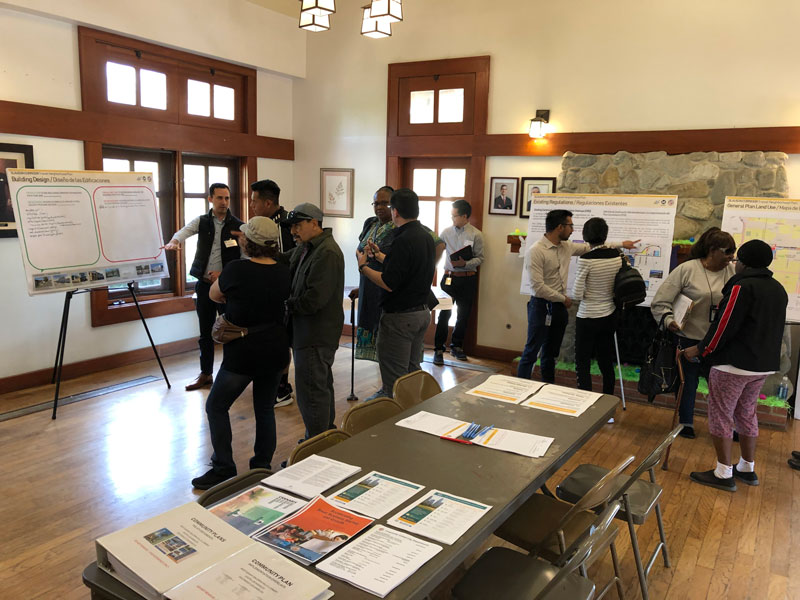 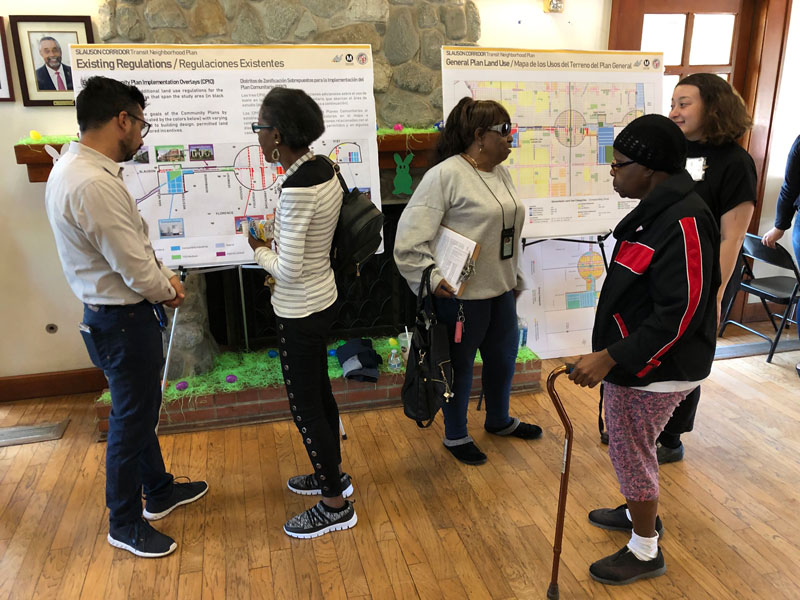 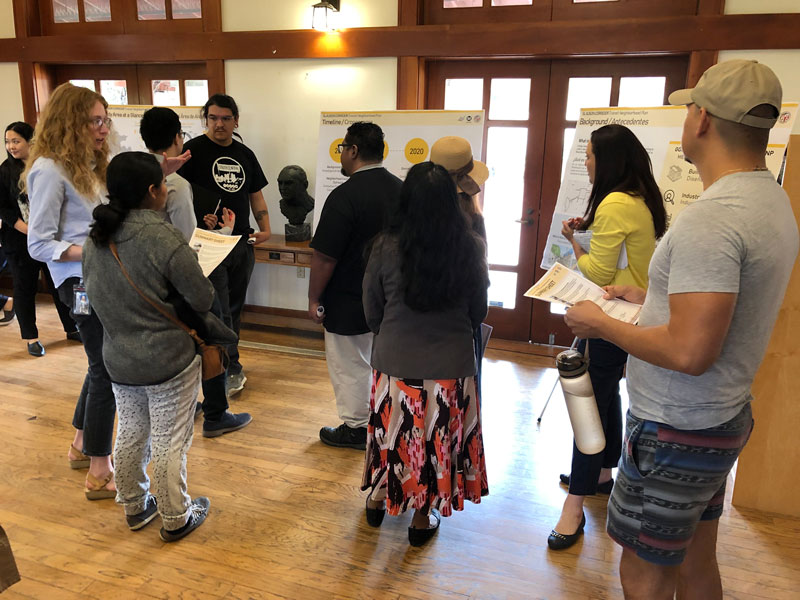 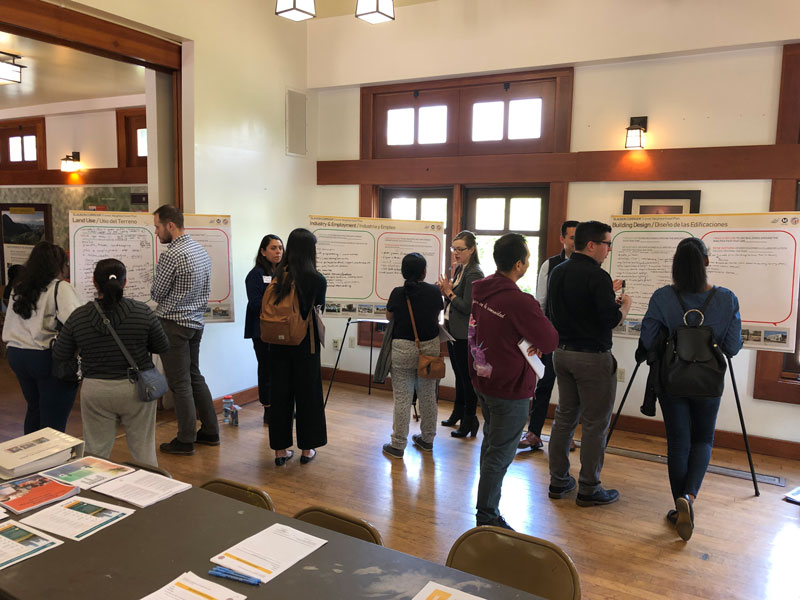 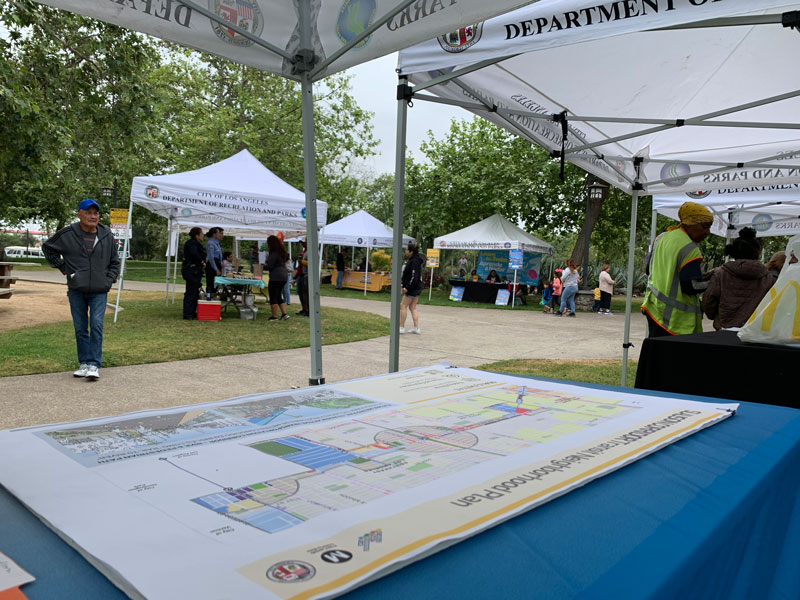 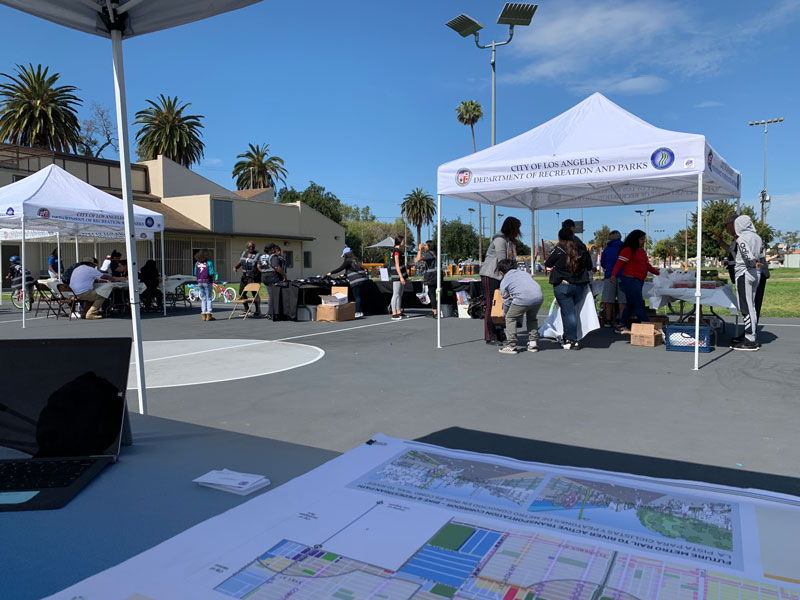 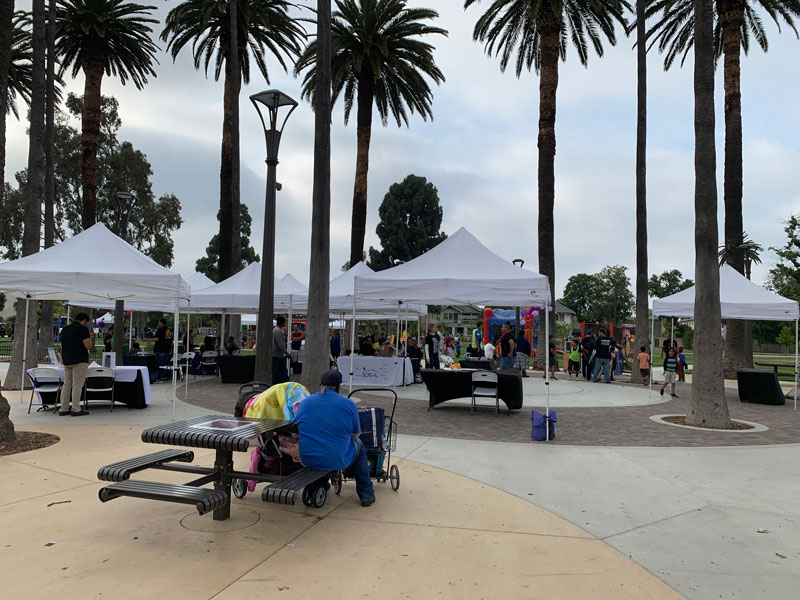 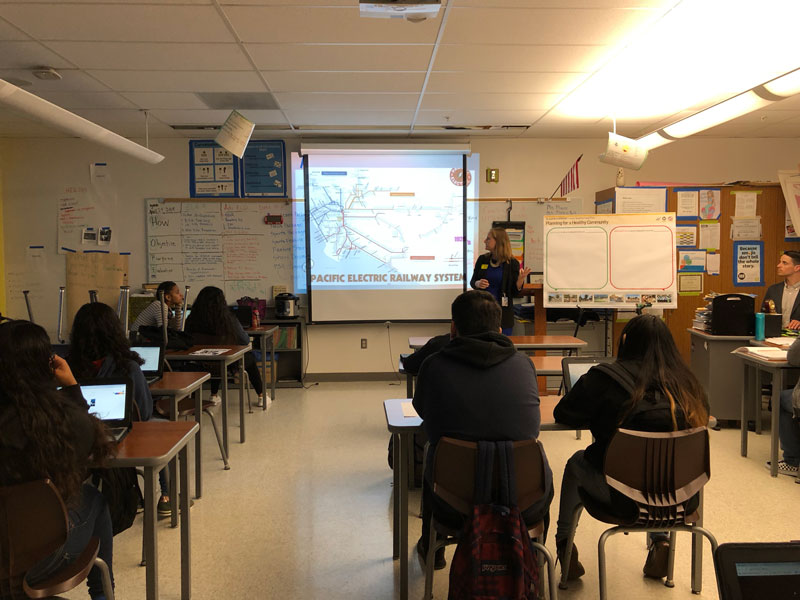 Ways to Get Involved