The Balboa Highlands HPOZ, located in the community of Granada Hills in the North San Fernando Valley, is the first post-World War II neighborhood in the San Fernando Valley to achieve historic district status. Balboa Highlands was constructed from 1962-64 by developer Joseph Eichler, who built thousands of homes in Northern California. It is one of only three Eichler tracts in Southern California (the other two are located in the City of Orange and in Thousand Oaks), and the only Eichler development in Los Angeles County. Its homes were built around an atrium accessed through sliding-glass doors, blurring indoor and outdoor space. Designed by noted architects A. Quincy Jones, Frederick Emmons, and Claude Oakland, Balboa Highlands represents an outstanding example of Mid-Century Modern residential architecture. The Balboa Highlands HPOZ was adopted by City Council in 2010. 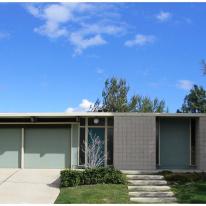