Often referred to by locals as “The Bungalows,” the Jefferson Park neighborhood is perhaps one of the City’s finest examples of both an early street car suburb, and the proliferation of the Arts and Crafts movement of the early 1900s, in the form of simple, yet elegant, single-story bungalows for the growing middle class. Fanciful eaves, intricate wood work, turrets, stone, masonry and shingle are displayed in ways that defy the modest scale of these houses and make the many streets of this vast district instantly charming. A significant number of Jefferson Park houses were built using prefabricated kits or plan books produced by the likes of Sears and Pacific Ready-Cut Homes. In addition to its celebrated architecture, Jefferson Park has long embodied the ethnic and cultural diversity for which Los Angeles is known. Upon the elimination of racially restrictive covenants in the 1940s Jefferson Park found instant favor with African American and Japanese American families and while the neighborhood demographics today are substantially more diverse, many of the business and institutions along Adams and Jefferson Boulevards and Western Avenue, within the HPOZ, reflect the contributions of these predominant communities. The Jefferson Park HPOZ was adopted by City Council in 2011. 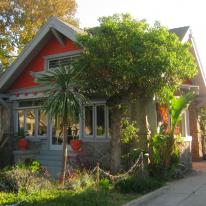